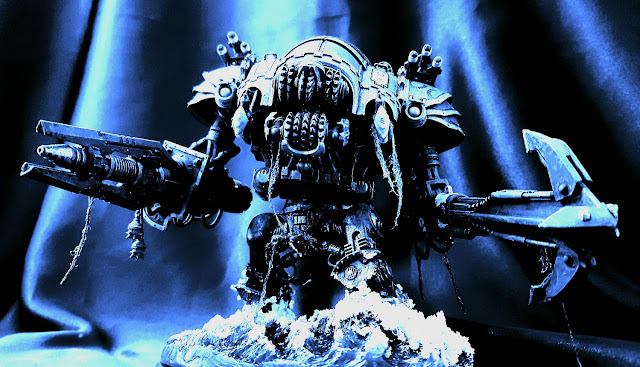 In my last post, I hinted that Conga Blue was nearing completion.  Well, he's finally done and I'm really pleased with the finished result!  Conga Blue is a heavily converted Knight based on the Questoris Preceptor with Forgeworld Knight Magaera carapace and shoulder plates.

More than any other Knight in the Court of the Fisher King, Conga Blue has a very specific purpose on the oceanic world of Corbenic.  He is clearly designed for underwater mining operations, with a huge las impulsor, a giant anchor shaped pick axe, twin las cutters extending from under the carapace and a gaping grinder maw which even houses an inner rubble disintegrator.  The shoulder mounted torpedo launchers provide this already formidable engine with the power to demolish bedrock with targeted explosive force.

To provide Conga Blue with increased manoeuvrability, his main engines have been modified to power two huge propellers, allowing his streamlined carapace to cut through water like a submarine!

Just a quick update on the Imperator build this week - I've been sketching out some ideas for designs such as the legs and the Starshatter Plasma Annihilator.  I've built the main structure of the feet and am now working on the basic shin stricture.  I'm building the leg superstructure then will sculpt the main leg armour separately as this will allow me more freedom when I get the the detailing stage.

I'll post updates on the Imperator as frequently as I can, but expect them to come only when I've reached a significant milestone.  I'm always happy to hear from you guys - let me know what you think of the build so far in the comments :)
By Goddenzilla
Email ThisBlogThis!Share to TwitterShare to FacebookShare to Pinterest
Labels: Conga Blue, Imperator Titan, Imperial Knights, Knight Preceptor, The Fisher King