In November 2022, Ira Metallum, my 28mm scale Imperator Titan finally made it to the field of battle at the Titan Owner's Club Walk 2022 in Milton Keynes.

Before I document my final design chapter, I'll share a few highlights from the Titan Owner's Club walk - I also just wanted to say a quick thankyou to everyone who commented on, followed and encouraged me to complete this mammoth task!  Special thanks to Phil T (Engine Phil - check his incredible painting out on Instagram!) who made some significant material donations to help fuel this rather hungry build project!

Fully built and assembled if not fully painted, she made her presence known, blasting apart and assisting in the destruction of no less than 3 warlord class and two reaver class battle titans.  After three years of hard work, her debut was rather explosive!

Ira Metallum didn't have it all her own way though as on the second day of the event, the traitor forces focussed their fire in the latter half of the second day, proving that even a god machine can bleed - from the terminal pictured below, you can see that there was only a single point of damage left on her body! 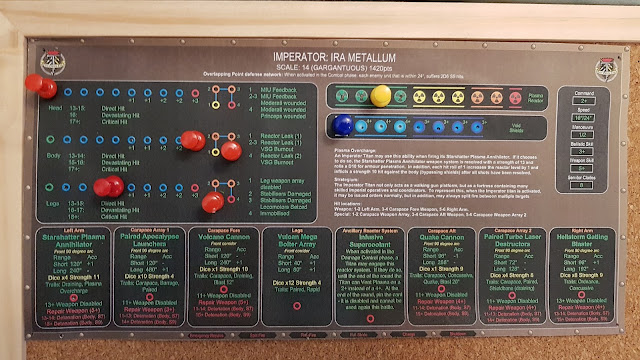 I feel I also need to thank my opponents Luke and Simon for being exceptionally good sports despite taking a horrendous amount of punishment from the Imperator over the weekend! 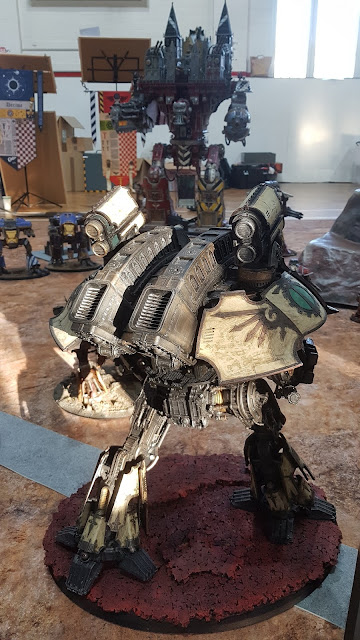 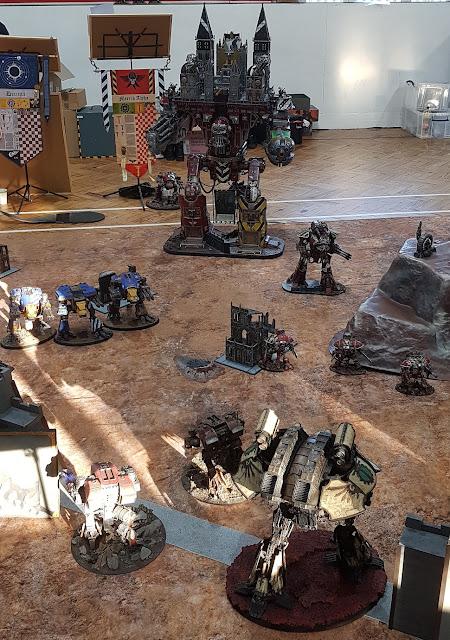 This will be my last mega update post now that the build phase has drawn to a close.  My intention is to reduce the length of my posts again but increase their regularity.  I found it hard to punctuate my Imperator posts because of the huge amounts of parallel effort being made on various sections.  Once I've completed the remaining painting and oil washes, I'll make another post dedicated to showing off every section of the titan in more detail - a sort of virtual tour for everyone to enjoy!

Even though I'd finished building all of the structural elements, the body still needed a lot of detailing before it could be called finished!  I used a similar process to detail these areas as I did on the shin guards.
I measured the areas which needed detailing and recorded them onto graph paper so that I could draw up the designs.

Rivets.  I love them.  They break up large surfaces, give scale to panels and add depth to the shallow raised details such as the aquilas on the support struts.

Rivets.  I hate them.  They take forever to apply and require 100% attention otherwise they can end up all over the floor.

Love or hate them, I applied a LOT of rivets to the Imperator.  Just because I'm an obsessive loon, I went back and counted the rivets which I applied (to the nearest 10).  I think I may have dreamt of rivets during the week I spent detailing the body...

The large flat carapace required detailing as much as any other section of the titan, but given the fact that it is a structural component, its shape is out of necessity fairly bland and boxy.  It took me quite a long time to come up with a detail scheme which was interesting while not overwhelming other areas.

And this is the point where things went slightly wrong.  I normally use the same type of silicone and have never had curing issues in the past.  When I did this pour however, the mix just wouldn't set.  Unfortunately, this meant that my master components were now completed covered with an uncured silicone mix which couldn't be washed off.

Luckily, I managed to get most of the congealed slop out of the mould, leaving only a viscus residue over the surface.  I painted neat catalyst over the surface of the silicone residue and thankfully this cured over a 12 hour period.  I was concerned that the heat of adding too much catalyst to the silicone might warp my master, but thankfully it was thin enough to just form a tough skin which I then cleaned away carefully with a scalpel.

After working back through the steps which I had taken to produce the mixture, I remembered that I had used latex gloves (which I normally only use for low viscosity liquids such as resin as they are easier to spill).  When I investigated further, I found that contact with latex in any form can cause condensation curing silicone to fail.  Armed with this very useful piece of information, I made sure that I didn't repeat the same mistake and vowed to share this information on my blog so that other model makers can potentially avoid this expensive mistake as well!!

I've said it before and I'll say it again; compound curves are definitely the hardest thing to get right.  So I completely ignored that fact and planned curved armour for the shoulder armour plates!  What can I say?  I'm a glutton for punishment!

An enormous walking armoured bastion needs to be defended.  In addition to Ira Metallum's 2 primary and 6 secondary hardpoints, she also sports a plethora of point defences consisting of:

As a result, there is no way to approach the Imperator without being within at least one, if not multiple overlapping fields of fire.  Good luck assaulting Ira Metallum with infantry! :)

I won't go into immense detail on the process of constructing the carapace towers as they were mainly built from various Citadel building components procured over the last decade.  Thanks to the modular nature of the Games Workshop building kits, making various different configurations was relatively easy.
Working out the tower heights to maintain the classic Imperator silhouette was crucial.  In addition to the aesthetics, it was also important to make sure that each weapon system had a clear field of fire over the forward turrets.  The newly released radar towers were released at just the right time to be incorporated - I think they look brilliant nestled in amongst the other towers.
Each tower has its own footprint plate which slots into the carapace like a jigsaw piece.  The tower plates all have their own specific slots, locking them all together for extra stability. 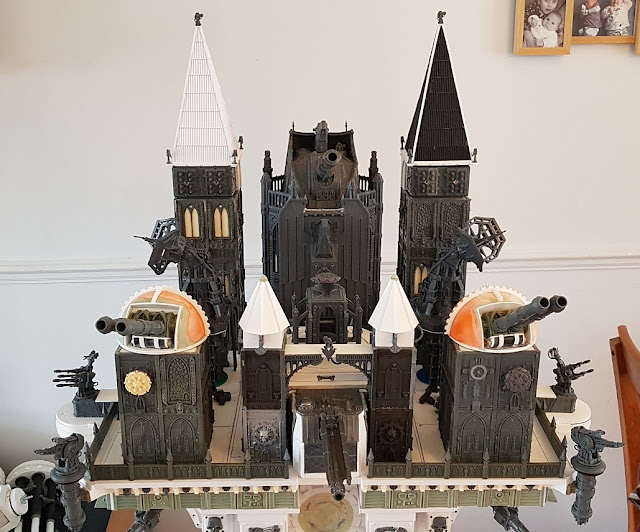 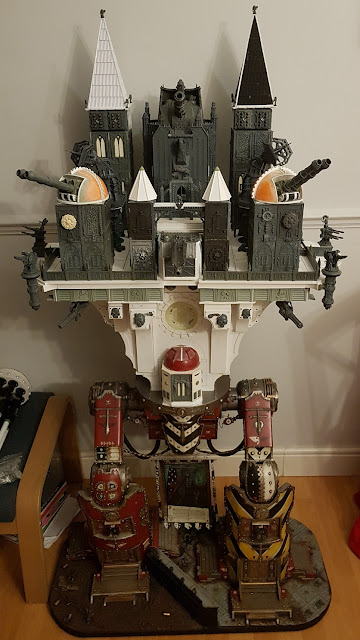 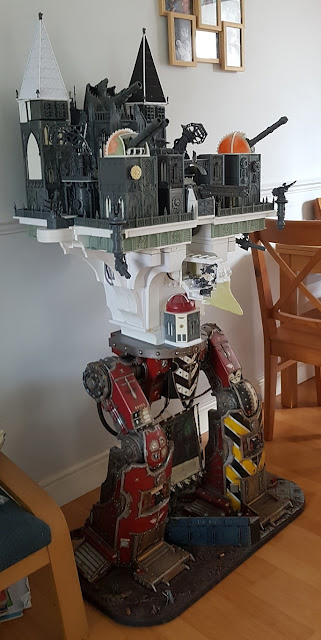 Ira Metallum is dotted with Void Shield Generator emitters - eleven to be precise:
Some of the VSG emitters needed a mount in order to be fitted to the titan.  Rather than producing them individually, I decided to make a single mount and add it to the carapace column mould to save on materials and time!

As previously mentioned, the Strategium lifts away to reveal a busy tactical command centre.  From here, the collected Imperial commanders can issue orders to support troops as well as analysing the battlefield for the best firing solutions! 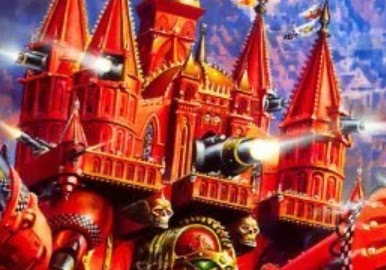 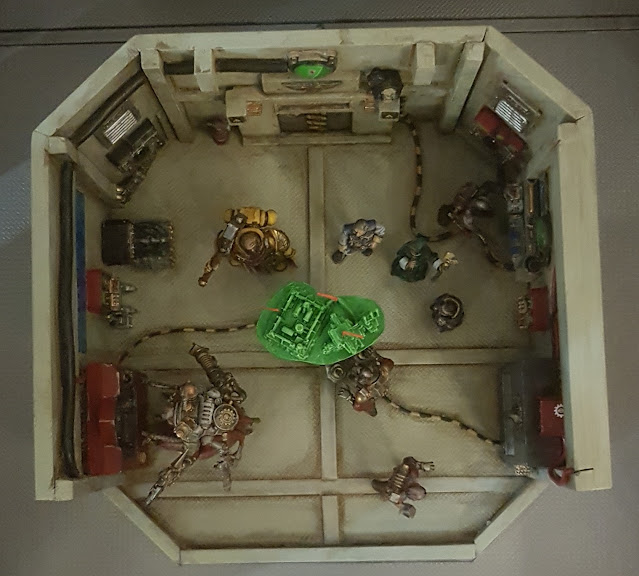 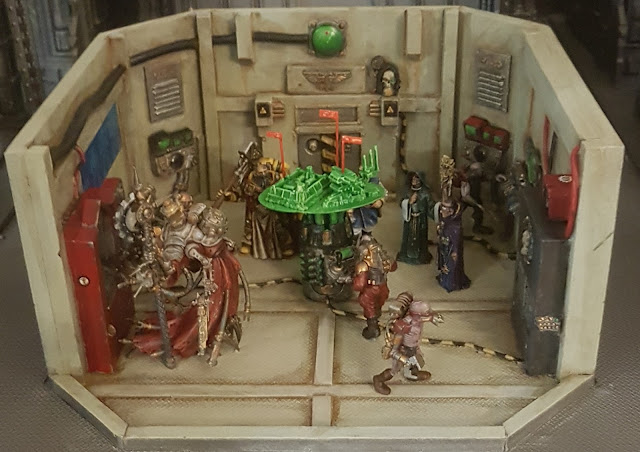 The head of the Imperator went through a few different iterations during the planning phase, but several features stuck.  I wanted to keep the grill-like mouth section which was so synonymous with the original Epic design.  I also wanted large pipes to break up the mouth and add some visual interest.  I also wanted to try and make an updated version of the typical Legio Metalica helmeted skull which is such a great symbol of the legion.
These factors led me to produce several different sketches which I have posted previously on my blog, but thought I'd show them again as a reminder... 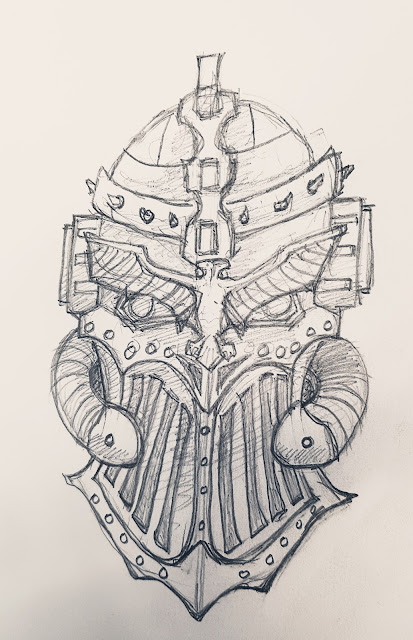 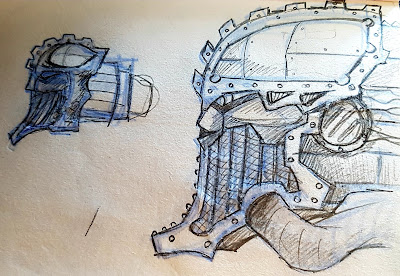 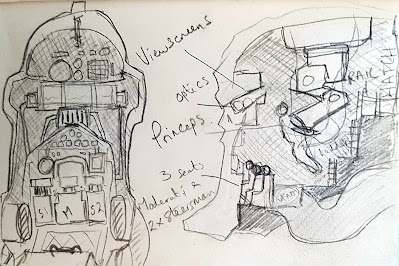 As I had previously built the basic shapes, the next step was to start forming the outer layers.  I used cling film to make sure the putty didn't bond the surfaces which needed to separate once it had cured. 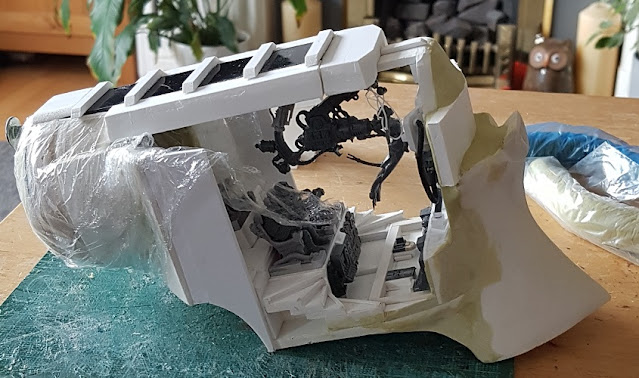 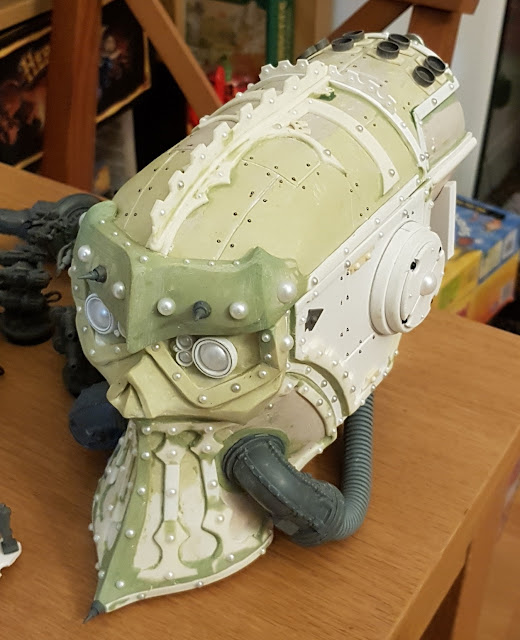 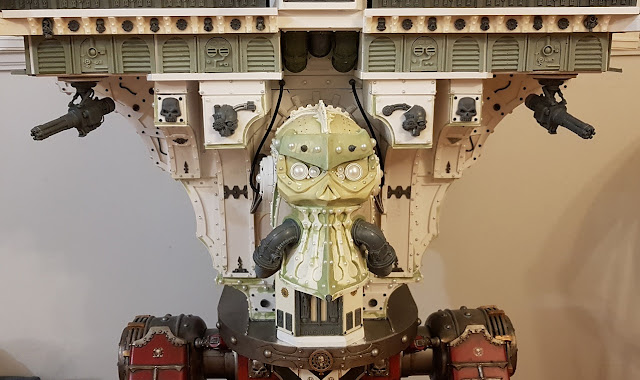 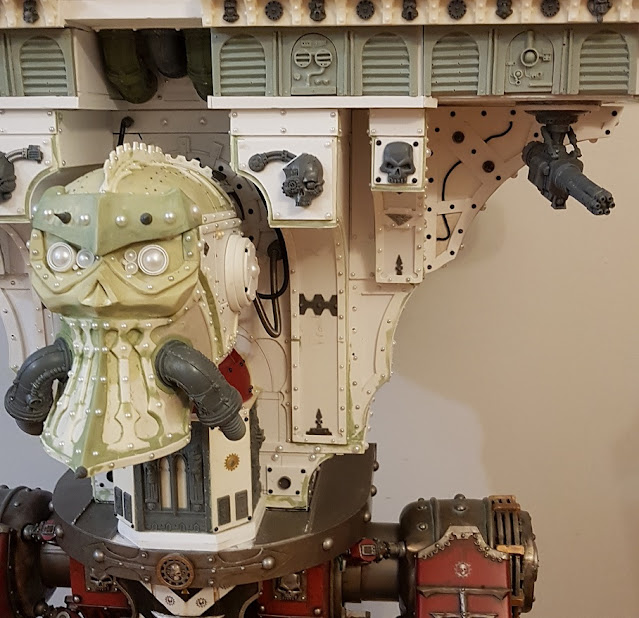 Due to time constraints, I wasn't able to incorporate the motor into the Hellstorm Cannon arm after all.  The barrels still spin, but for a number of reasons, I abandoned the gimmick in favour of completing the model on time for the TOC Walk.
And it all would have worked out if not for an ill-fated pumpkin carving accident involving a scalpel which left me with a horrendous injury on the palm of my left hand.  I won't show pictures of the injury itself as it was pretty horrific - I ended up in A&E, a specialist hand clinic and eventually in surgery to have the muscles sewn back together - it was an extremely deep cut which left me with very little movement in my thumb.
I've suffered injuries in the past, but nothing was more terrifying for me than the thought of potentially losing the ability to work with my hands.  Creating things by hand is my one overriding joy in life and the thought of losing that to one accidental slip was devastating for me.
Thanks to our wonderful National Health Service who were absolutely amazing from start to finish, I was just about able to finish the Hellstorm Cannon build and base coat the titan before the Walk in November.  The surgeon told me that I was very lucky to have missed the tendons in my hand and thankfully I have now recovered full mobility in my hand!  So thanks to everyone who helped me on the road to recovery, you have no idea how much it meant to me!
Anyway, enough self pity!  Here are the few images I took of the Hellstorm Cannon build in progress... 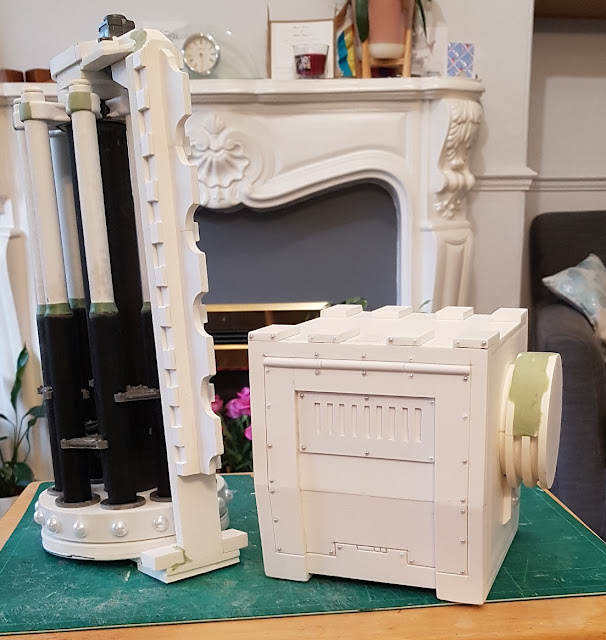 Again, due to my hand injury, painting the titan was very slow and as a result, it wasn't entirely finished by the Walk deadline.  Below are some shots of my painting progress - now that Christmas is out of the way, I can finish the job and promise to share some decent pictures soon!  Thanks for reading as always! 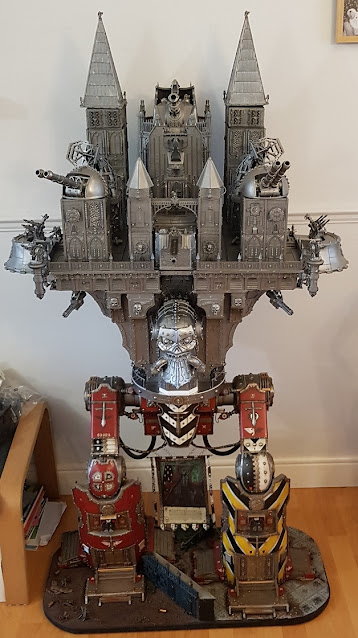 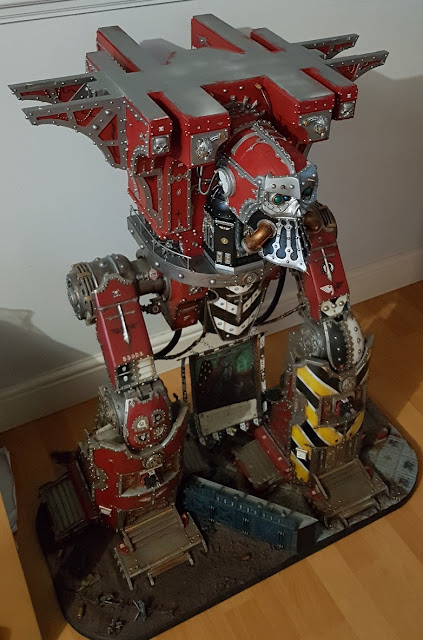 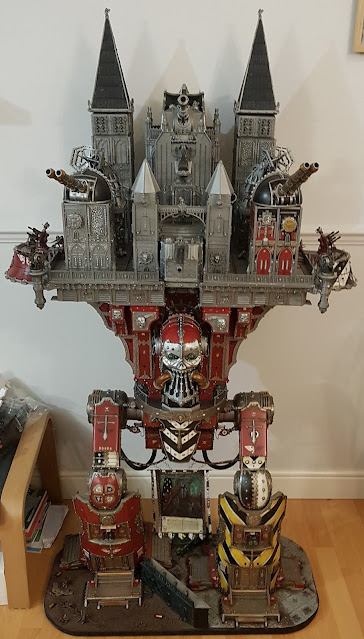 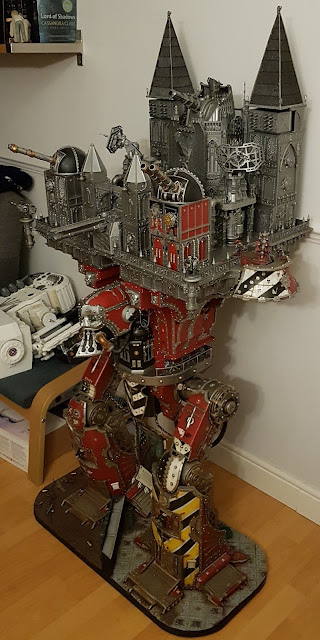 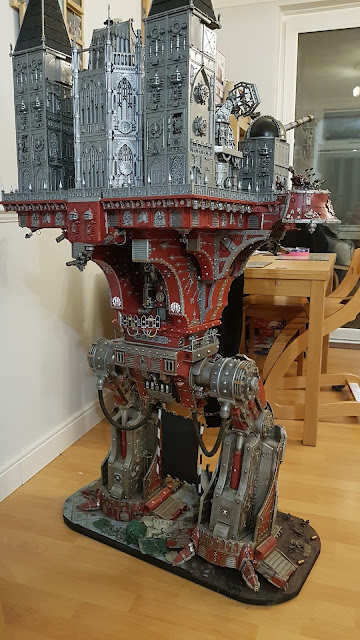 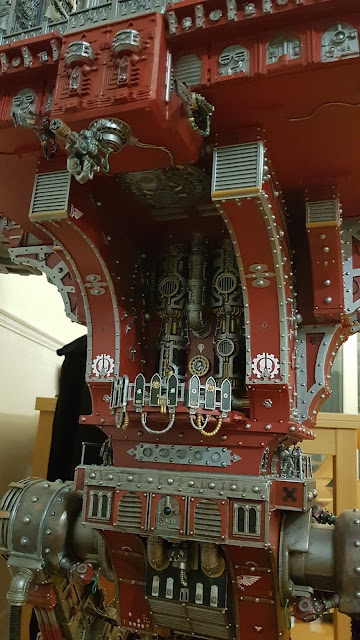 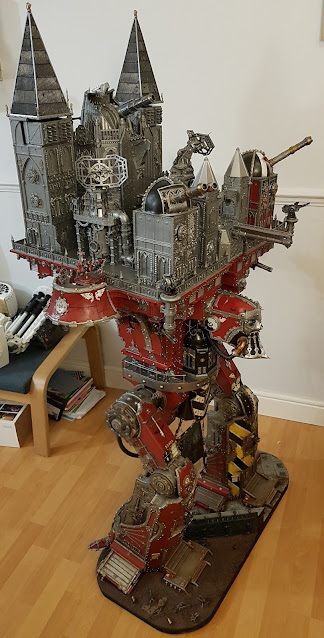 *please note that I do not condone recasting - i.e. the complete reproduction of copyrighted IP.  In this instance, I used cut down and converted knight heads to be used as mounts for the actual plastic face plates decorating the hull.  Under these conditions, I consider the parts to be part of my own design process in the same way that I would use Styrene or Foamex.  Although I store all of my silicone moulds for future use (repairs etc), they will never be used to produce parts for resale or any other purpose.
By Goddenzilla No comments:
Email ThisBlogThis!Share to TwitterShare to FacebookShare to Pinterest
Labels: Hellstorm Cannon, Imperator Titan, Ira Metallum, Metalica, Princeps, Starshatter Plasma Annihilator, Titan Owner's Club
Older Posts Home
Subscribe to: Posts (Atom) 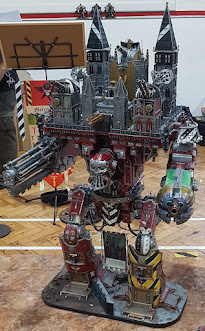