Deep in the dark, a mighty Troggoth stirs...

End of the year; end of the road!

As 2021 draws to a close, so too does another of my larger projects.  After a couple of years, I've finally finished the Troggoth king and his various stinky subjects!
I've really enjoyed working on the Troggoths and may revisit the army at some point in the future.  For now though, I'm happy to call my Troggherd complete and move on to another project.
I hope you've enjoyed following my progress on the Trogg king - there were definitely a lot of highs and lows during the sculpting process, but it was ultimately worth all of the hard work and I definitely count it as one of my most successful sculpts to date.
I've included pictures of the King and the final wave of his 'subjeks' for you to enjoy - if you want to see close ups of the rest of the herd (as well as their WIP shots), check out my previous post!  I've also shared my final batch of WIP images for the herd should you be interested in my build process :)

I finally completed my Troggoth King on Dankhold Colossus to lead my Troggherd in their rampage across the mortal realms!  I started this project a couple of years ago on a whim after the Dankhold Troggoths were first released.  I loved the aesthetic, but as always, wanted to go bigger!
The king himself is approximately 10% larger than a standard Dankhold Troggoth while the Colossus he rides is... well, colossal!  The base alone is 12" across, so you can imagine how large the creature itself is!
I decided to paint the King a fleshy colour to contrast with the other Dankhold Troggoths in the herd.  I chose to paint the Colossus in a similar palette to the Rockguts but slightly darker and accented with green for his mossy underbelly.  I intentionally chose red for the dorsal crystals to tie in with a number of others found across the army, including those which make up the King's crown. 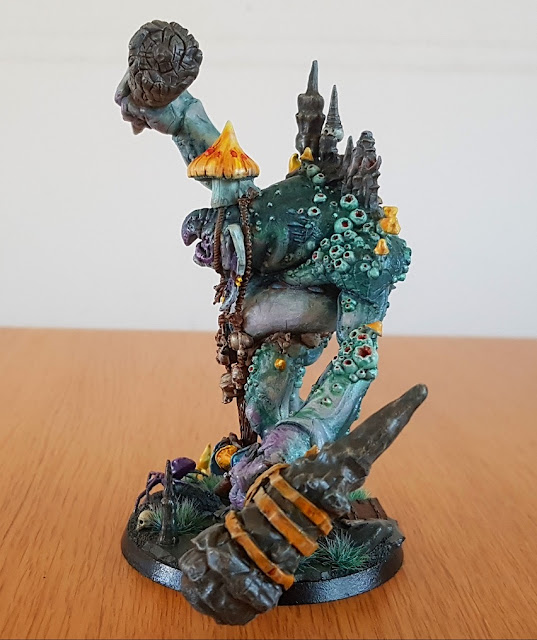 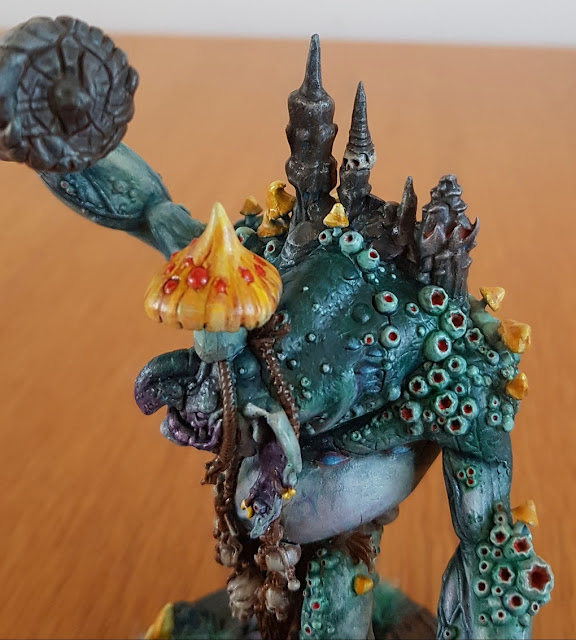 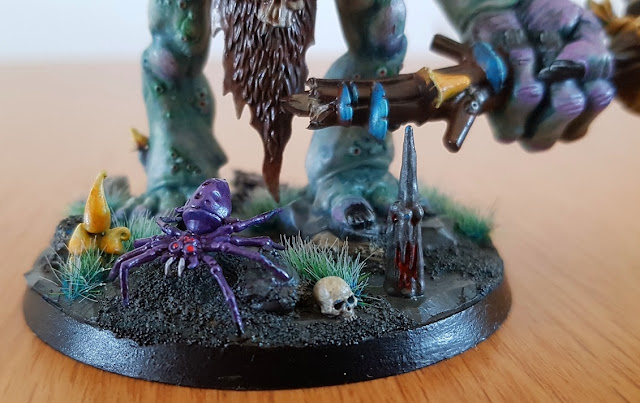 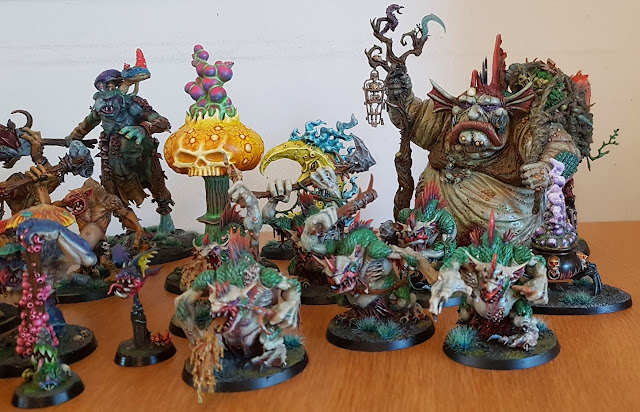 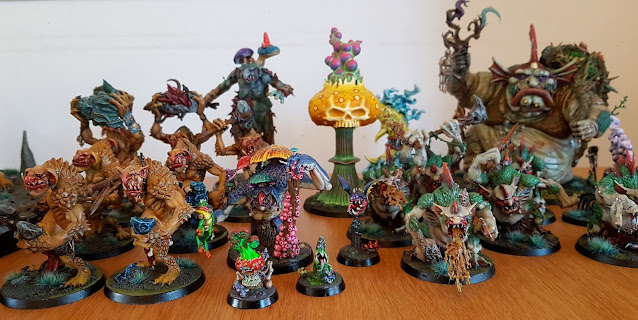 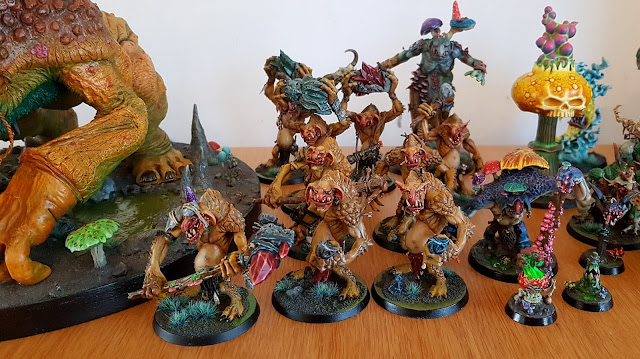 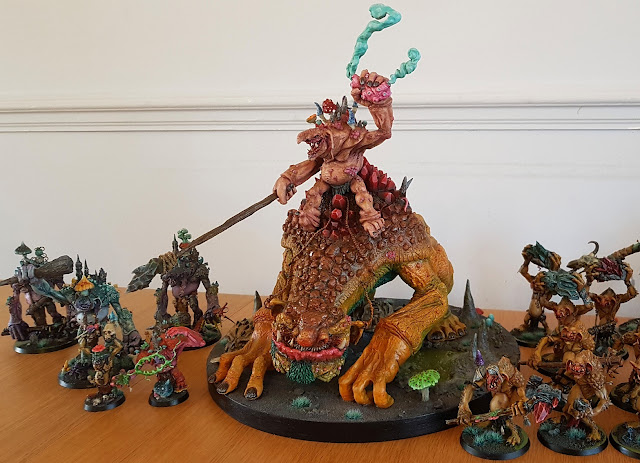 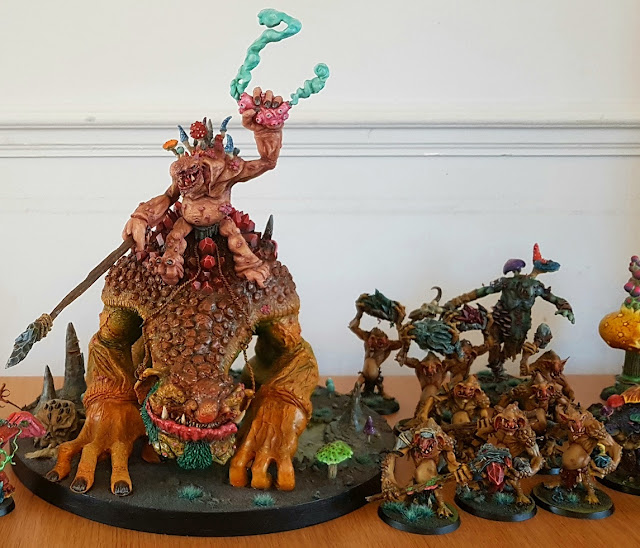 While planning the base for this model, I knew I wanted to add some larger points of interest as there was quite a large area to fill underneath the creature's body.  After much deliberation, I settled on decorating the base with a Mangler squig skull, but after completing the skull, I couldn't resist making the rest of the skeleton...

I've thoroughly enjoyed working on the Troggoths and can't wait to have a game of Age of Sigmar 3.0 with them - they may not be that competitive, but they're certainly fun to play with!  I've even put together a Warscroll for the Troggoth King which should be really fun to play with and against! 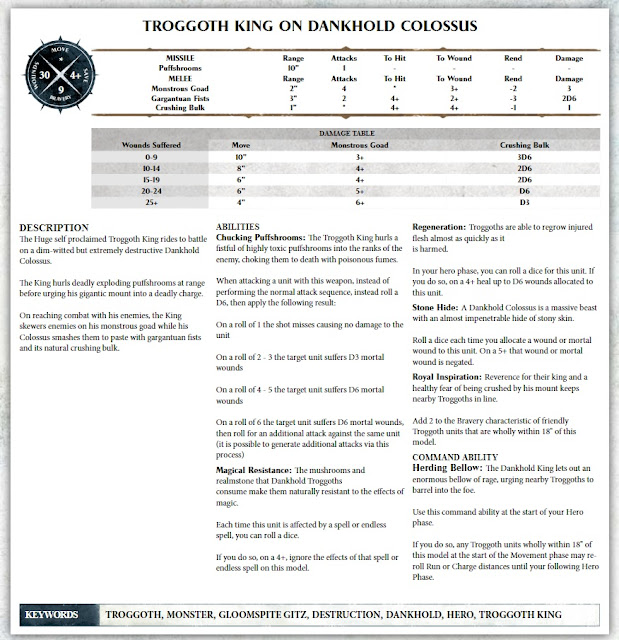 I hope you've enjoyed following along on the Trogg-train as much as I have!  As I've had to pack the Imperator build away for Christmas, I've been working on a new project deep within the steel corridors of Necromunda. Stay tuned as I'll be posting again soon! :)
By Goddenzilla
Email ThisBlogThis!Share to TwitterShare to FacebookShare to Pinterest
Labels: Age of Sigmar, Fellwater, Mollog, Rockgut, Trogg King, Trogg Throne, Troggherd, Troggoth, Troggoth Hag