As if finishing a Reaver Titan wasn’t enough, I’ve ploughed on with yet more Imperial Knights this week!


I’ve broken down my Imperial Knights into several themed factions.  The most straight forward one is my House Raven Knights which is unsurprising given that they are undeniably linked to the Legio of my Reaver Titan (and eventually my two Warhounds once they’re built and painted!); Metalica.
Metalica and House Raven have an unbroken bond dating back to before the Horus Heresy, giving a rich background for me to draw on and cross-pollinate.


So, to start with, I want to do a quick rundown of the Knights and Support units which I own and their current build status.  I do intend to try and add progress to my Blog as and when I complete a unit from the Force:

The elements of the force which I’ve completed so far are the Huntsmen, 3 Lascannon equipped armoured Sentinels and Arbiter, my one finished Knight Raven Questoris suit.

Below is a picture of the Huntsmen and some shots of an objective token I made from spare parts to go along with my Knights:

I loved the idea of smaller machines crewed by House Serfs, lowborn residents of Kolossi who are given the opportunity to emulate their masters, riding out ahead of the more heavily armed knights as a scouting force.
This is probably an extremely hazardous profession, hence them being given the honour of wearing the House colours.  One even sports the House symbol on his hull – he must have made a good impression on the battlefield! 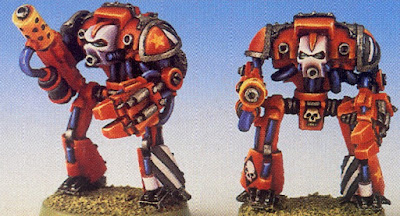 Only this guy springs to mind….

In case you’re unfamiliar with Scooter, he’s one of the Go-bots.  A shameless 80’s cartoon rip-off of Transformers produced with epic levels of laziness to sell some of the worst toys ever made…
Seriously. How did they make him look more like a mobility scooter than a vesper?! 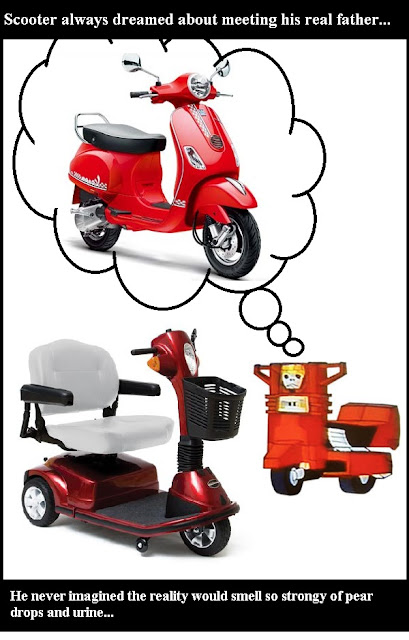 A toy so tragically bad, it resorts to cheering for itself in the box: 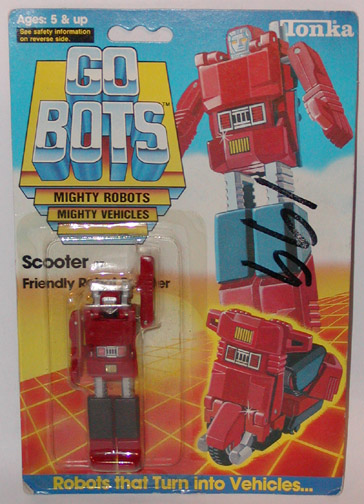 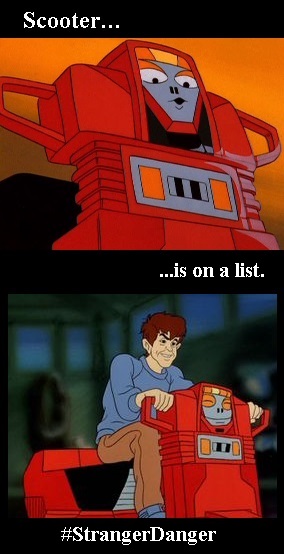 To be honest, Scooter wasn’t the only Go-bot that seemed to enjoy exposing himself to children on the telly either… 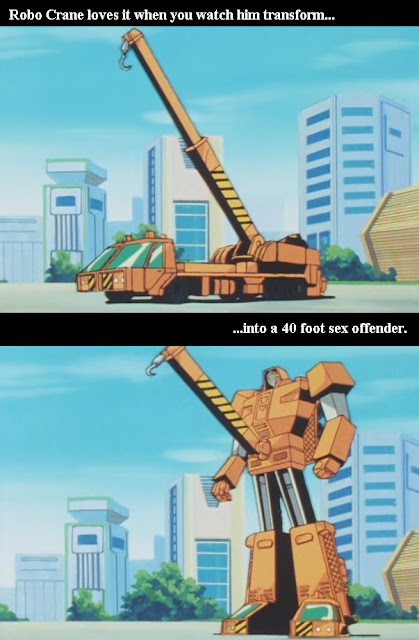 Anyway!  Back on subject! Arbiter was given a scratch built power fist of epic proportions to match the scale of the original epic model– I worried that it would look ridiculous, but I think it worked out really well!  Even though he’s recently had a refit to include a carapace Autocannon array and some extra base detailing, I’ve never even considered replacing his fist with a newer Thunderstrike gauntlet – I think it makes him wonderfully unique and can easily be used to represent a relic weapon from the new Codex; The Paragon Gauntlet! J 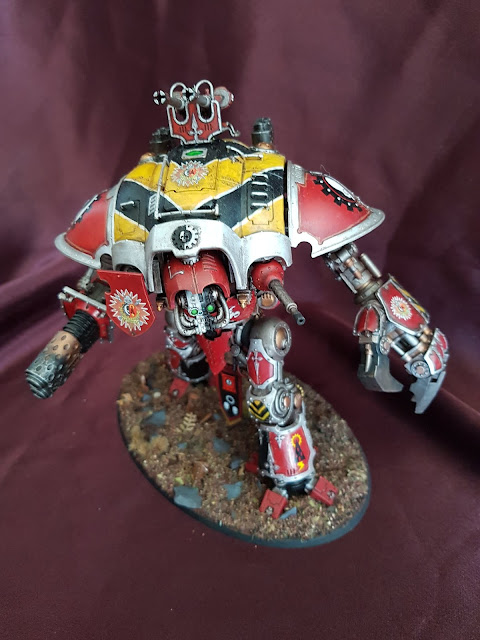 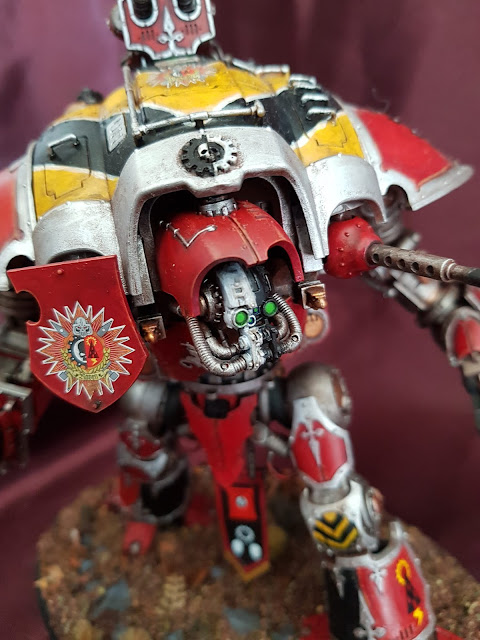 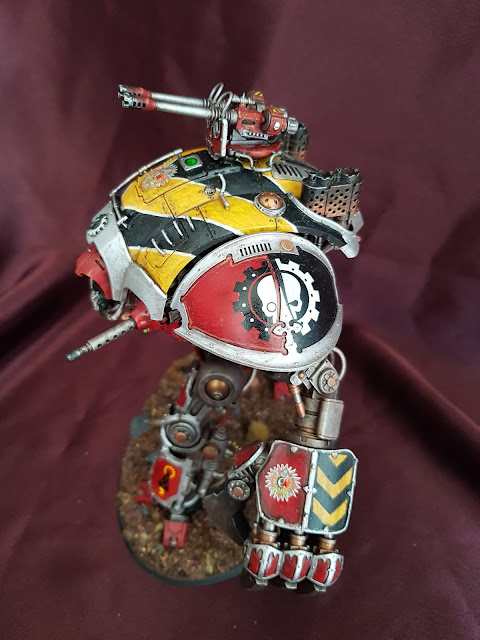 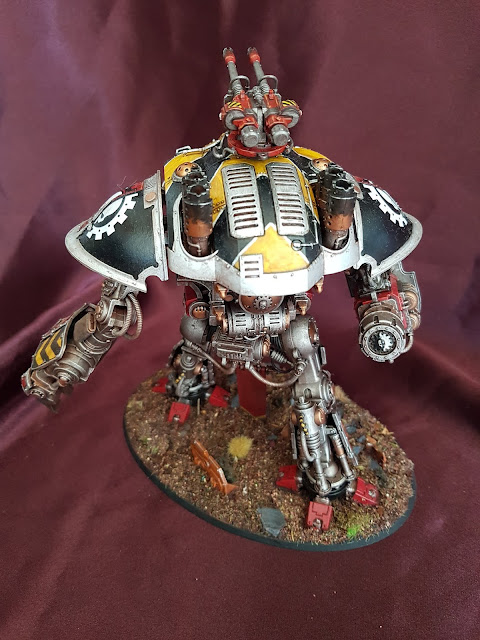 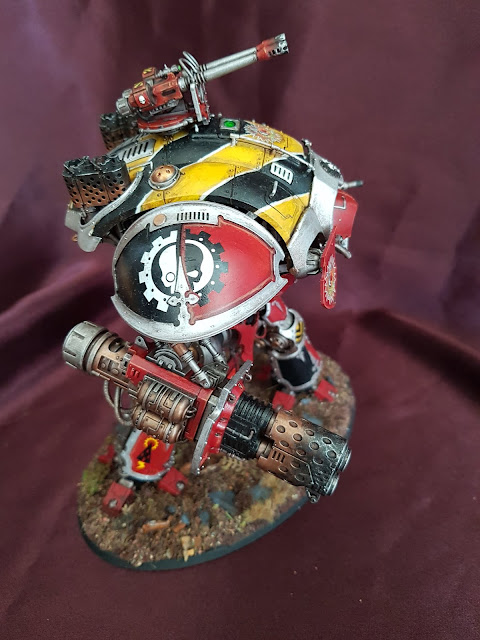 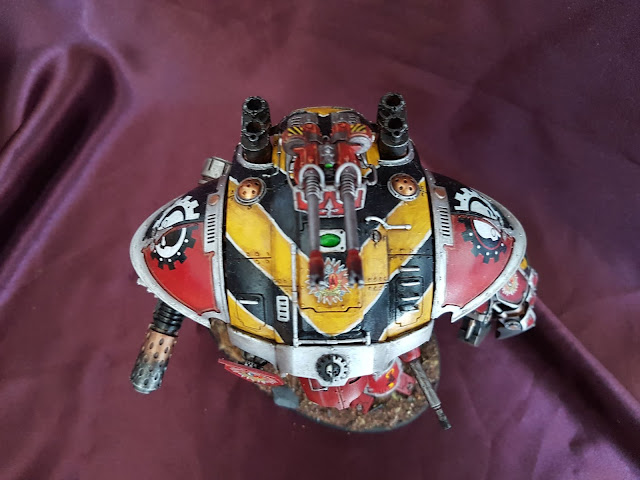 Next up are my Freeblades which are organised into 3 distinct factions that are each centred around a single Legendary Knight.

Each one has a really strong theme as I see them as named characters, travelling the galaxy with their own select retinues...
The first up is the mysterious Faded Remnant which are centred around the legendary Knight The Spectre who you can see in the images below. 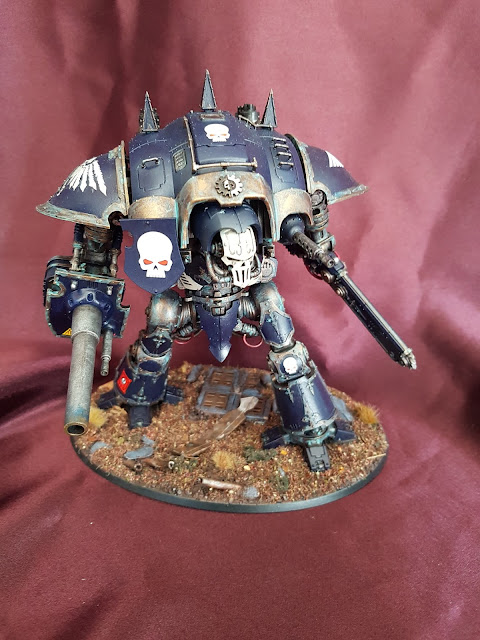 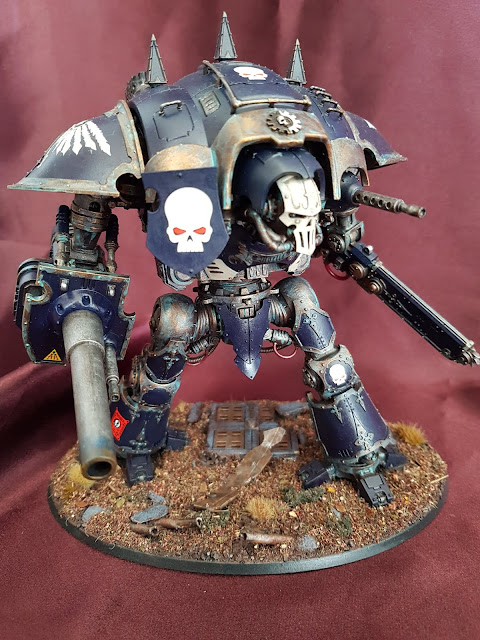 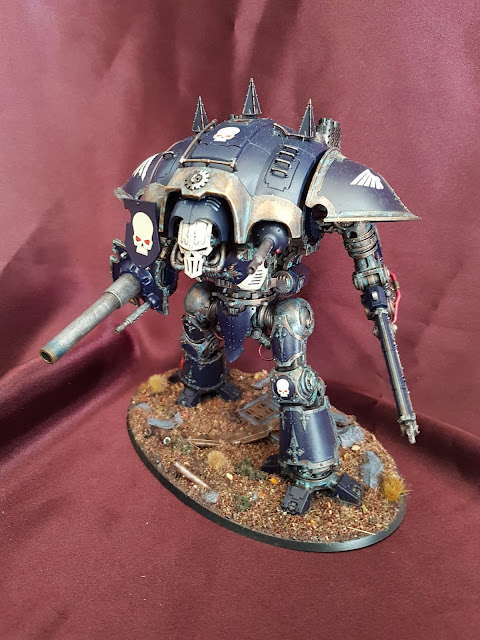 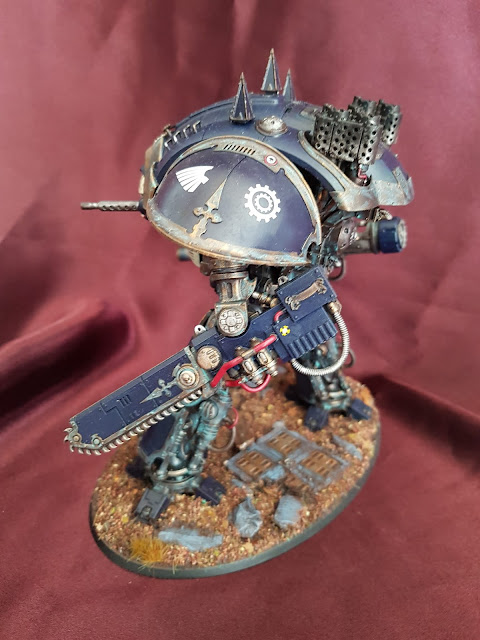 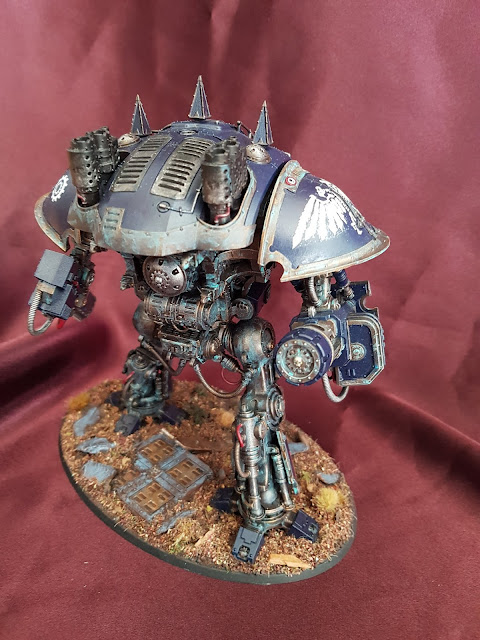 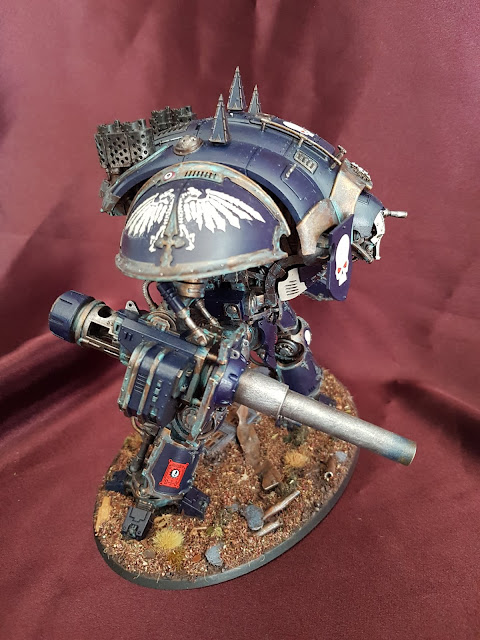 I’ll feature my two remaining Freeblade factions, The Banner of the Bear and The Court of the Fisher King in a future post.  I’ve already shown the Kodiak in a previous post, but he’s getting some friends to make sure that he doesn’t get lonely!  As for the Fisher King… well. He’s nearly ready to walk…
By Goddenzilla 1 comment:
Email ThisBlogThis!Share to TwitterShare to FacebookShare to Pinterest
Labels: 40k, Faded Remnant, Freeblade, Go-Bots, Goddenzilla, House Raven, Imperial Knights, Metalica, Objective, Sentinels, The Fisher King, The Kodiak, The Spectre

It's been a long time coming...

I've finally finished my Reaver Titan; Ferrum Dominus.  I started work on him an embarrassingly long time ago, but he's finally finished and I'm genuinely thrilled to be able to show him off at last! 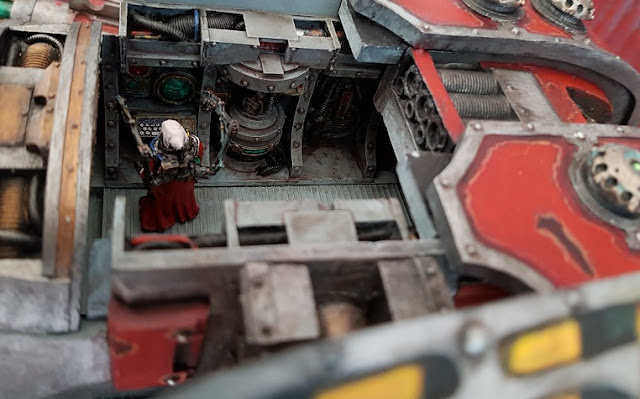 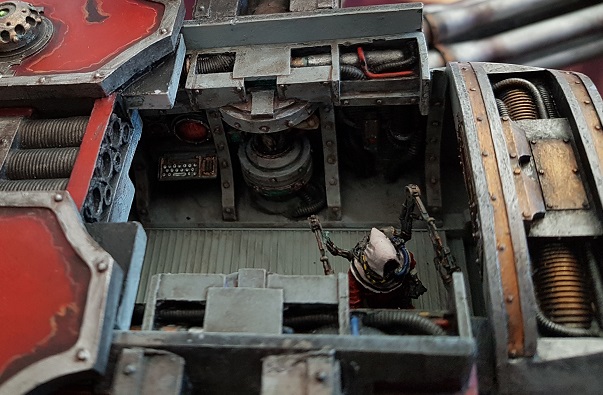 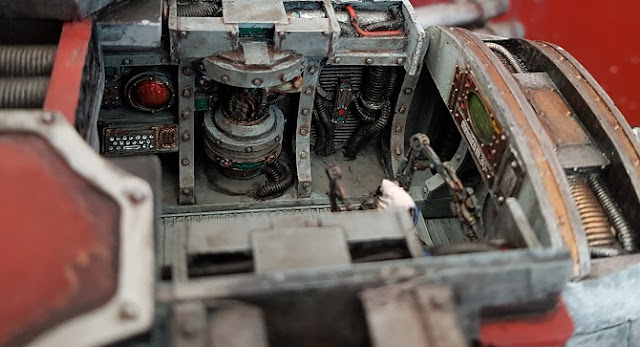