The Road To Golden Demon, Warhound Progress & Making A Princeps

It's been a while since I've posted as I've been keeping some of my projects under wraps.  The majority of these have been in preparation for either events or the big one itself... Golden Demon!

I've asked several this year whether I've ever won a Golden Demon - the simple answer to this question is no!  I don't generally attend events these days - juggling a young family with work commitments hasn't left me with much spare time in my calendar!  But I decided that this year would be different...

I have booked a ticket to Warhammer-fest in May and have decided on the 6 categories I'll be entering.  To be honest, if I take home a bronze award, I'll be over the moon!  Anyway, here are the ones I'm entering:

1). 40k vehicle - Touching up the Fisher King as he's a firm favourite!
2). AoS Large model - Again, I'm looking to touch up the Frost Giant (and am hand-carving plinths for all of my entries!)
3). Duel - I'm afraid this one is a secret for now!
4). Small scale miniature - Again, this one's a secret, but I will say that it's an Adeptus Titanicus focussed piece...
5).  Lord of The Rings Miniature - I'm working on Sauron the Necromancer at the moment.  In terms of the miniature, he's built straight from the box.  His display base is considerably more involved though!  So far, I have very quickly put together a rough idea of what it will look like.  Essentially, it will be Sauron moving through a fiery arch in Dol Guldur...


6). Finally, I will be entering Mollog's Mob into the AoS Warband category.  I love these miniatures so much; ever since I saw them previewed, I have wanted to paint them and create a freestanding display depicting them emerging from a cave.

It's been a while since I posted about my Warhound, so I thought I'd give a quick update.  I've almost completed the internal details.  Once these are done, I can finally assemble the torso and work on the outer sections.  With only the engine room and a Moderati left to paint, this should move along quickly now!  To be honest, I need to make significant progress on this once alongside my Golden Demon entries as the Titan Owner's Club Walk is only a month behind Warhammer Fest and I'll need both Warhounds for that!

As I'm sure any regular reader of my blog will know, I do frequently throw myself bodily down the rabbit hole and create some crazy hobby-related artefacts.  Well, my Titan obsession has lead to another new side-project!

I decided whilst creating a Roman Gladiator outfit for my son to wear to school that (in a fit of fevered madness), I could also make a Titan Princeps cuirass relatively easily.  I mean, how hard could it be?!

Not content with just having part a costume, I decided to also make myself a Titan themed prop in the form of a 41st millennium engineering and maintenance tome﻿!  I purchased an old book from a charity shop and created some stencils using masking tape before painting on the symbols and giving the page edges some nice golden edging.
﻿ 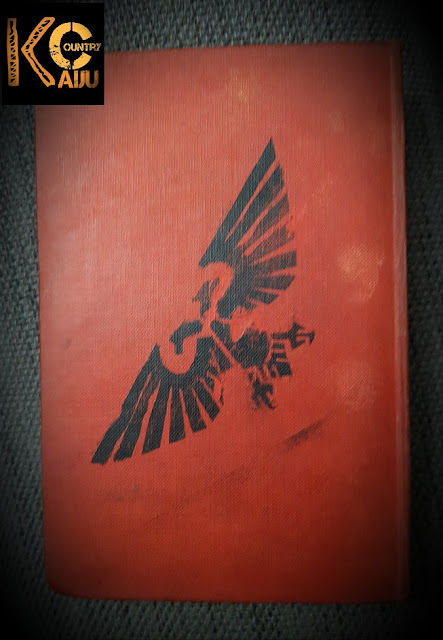 That's all from me for now, but as always, I'd love to hear your feedback in the comments section below!
By Goddenzilla 1 comment:
Email ThisBlogThis!Share to TwitterShare to FacebookShare to Pinterest
Labels: 40k, Adeptus Titanicus, Age of Sigmar, Metalica, Mollog, Princeps, Sauron, Warhammer, Warhound Titan
Newer Posts Older Posts Home
Subscribe to: Posts (Atom)