As the structural build (with the exception of the arms and head) is now complete, I was able to assemble Ira Metallum.  I am close to being able to permanently fix the hips and feet in place, but am holding off until I'm completely happy with the pose.  I'm pleased with how she's looking so far; not static, but not over-extended either.
In terms of size, Ira Metallum is approximately 4.5 feet tall, absolutely dwarfing everything around it!  The width of her hips is approximately the same height as a Forgeworld Warlord titan!  I'm pretty happy with the size in general; I used plenty of reference when deciding on the scale.  The pictures below were pretty influential...

In order to get Ira Metallum standing, I had to get the pelvis built and detailed to a point where I could lock in the hips.  I detailed the basic structure build in my last post - below are some images of the detailing process including the creation of a giant crotch plate bearing the Titanicus symbol.

The legs have been the single hardest element to complete due to the complexity both in universe and in the real world due to the structural load on the hips.  In my last post, I showed how I was strengthening the load bearing areas.  Next came the posing so that I could work out exactly where the locators would need to be in order to lock the pelvis in an upright position.
After the above picture was taken, I brutally cut off the toes of the right foot as they would need to be reposed to accommodate the pose. 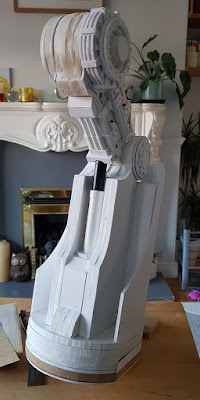 Once the positions of the hips were marked off, I could build the position lock inside the hip socket and connecting shaft.

I have already built the Macro / Quake Cannon tower and Apocalypse launchers, but there's a fair amount still to do on the carapace.  I'll be adding the two quad guns for AA support, the central volcano cannon and two turbo laser turrets.  There will also be a strategium dome in the centre like the original epic miniature.

As well as the structures, I've already created reloading servitors and crew for the carapace small arms (is a quad gun really small?!); I'll show some pictures in a future post!
I have a ton of filling and sanding to do as well as finishing off the left leg pistons.  Once that's done, I will be able to screw the feet into the base and finally glue the hips in place. Once I've done that, it will be time to detail the shins and add the cabling / hosing to the legs and pelvis.
I have intentionally left the really fine details for now.  I intend to try and do things like heraldic flourishes and rivets on the trim at once so as to avoid unnecessarily slowing down the build process.  Adding the rivets will be incredibly time-consuming as it involves drilling a shallow hole then gluing a 1mm ball bearing into the hole.  I estimate I have about a thousand of them to do...
I'll try and provide another update around mid-October - hopefully by then I will have some arms and a head to show as well!
By Goddenzilla 10 comments:
Email ThisBlogThis!Share to TwitterShare to FacebookShare to Pinterest
Labels: Ferrum Dominus, Imperator Titan, Ira Metallum, Metalica
Newer Posts Older Posts Home
Subscribe to: Posts (Atom)