Ever since I first saw the Varghulf which features in the game Total War Warhammer, I wanted to make a miniature of it.  Well, I finally got my butt in gear and started sculpting it in Super Sculpey!

For anyone who hasn't seen how this monstrous creature was re-imagined for the game, here are a couple of stills of the beastly vampire monstrosity:

As always, I started my sculpt with a foil and wire armature then started by making the basic shapes for the muscles and other main features.  It's still early on, but would love to know what you think!

Into the Depths rejigged

Due to unforeseen circumstances, the 'Into the Depths' campaign event I was working on had to be cancelled.  Rather than consign all of the terrain, converted miniatures and resources to storage, I decided to rework it so that I can play with my son who is just starting to show an interest in Age of Sigmar.

The premise of the event was that a network of caverns had been discovered and each had a different theme, with unique monsters, terrain and items.  Below are some photos from the inhabitants of the first two caverns. Enjoy!

The Cave of Living Stone

At first glance, the Cave of Living Stone might appear to be a cold, grey lifeless cavern, but it's actually inhabited by some creepy, sinister monsters... 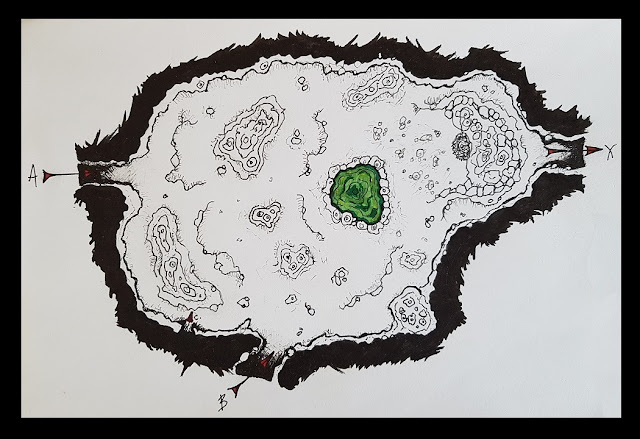 The main antagonist of the cave is a large and terrifying Cockatrice.  Turning any who venture into its lair to lifeless stone!  Only frozen statues and vicious stony creatures are tolerated by the Cockatrice, making navigating the cavern even more treacherous!

One path within the network of caves leads back out into a secluded mountainous pass.  Named for the mighty beasts which circle the skies above, the Griffon Roost is as perilous as it is majestic to any who might witness it. 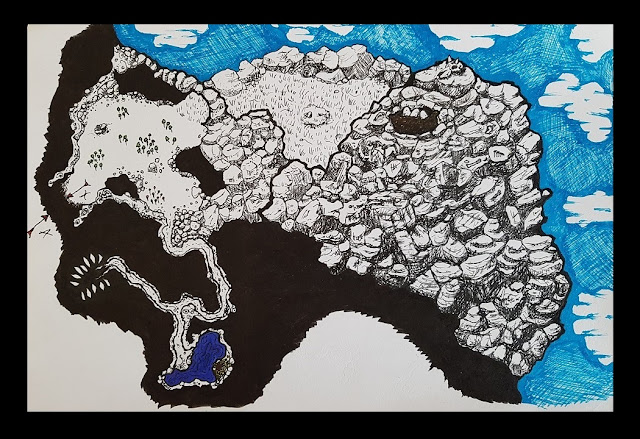 The Blowfish is a project which I started a couple of months ago to accompany the small band of Skitarii Aquis PDF troops which will accompany The Court of The Fisher King.

The original idea was to have the miniature hovering in the truest sense using magnets.  This proved difficult to achieve for a number of reasons, the main one being the need for an electromagnet to project an even field which the skimmer would be able to sit on and the additional batteries, wiring etc which would need to be hidden in the base.

In the end I decided that it would compromise the look of the finished piece for the sake of a gimmick that really wasn't worth it.  I've instead achieved the look I wanted by creating a resin cast base with two magnetised rods to support the hovering craft above the waves.

I decided early on that I wanted two things from the base.  Firstly, the craft had to hover over it as if crossing a large body of water.  Secondly, it had to look as though it is interacting with the water in a  realistic way.  That meant water dispersal from the passing of the craft and its large rear mounted fans.

I started as always by looking at the closest approximation in the modern world.  The Skorpius Duneride is actually a hybrid design consisting of:

The look of a traditional landing craft like the American LCM8: 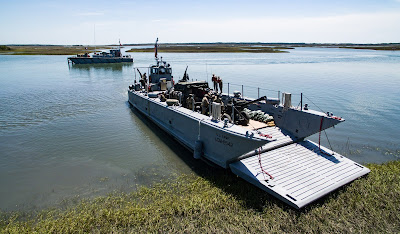 And the functionality of a modern hovercraft like the gigantic Russian Zubr class transport hovercraft: 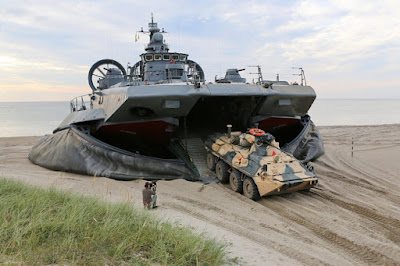 Although the Dunerider looks like the LCM8 with the fans of the Zubr, the way it would move across a body of water and the way that it would impact the surface would be a lot more like the Zubr than the LCM8 which is more like a traditional boat.

Below is an image of a Zubr hovercraft moving over water.  The most important thing to note is how the water behaves as its fundamentally different to the way in which it behaves around the hull of a ship.  Whereas a ship cuts through water with a pointed hull, displacing it in a triangular pattern right from the front, a hovercraft has a larger, blunt nose which 'hovers' above the water rather than pushing through it.  The water displacement starts much further back, around halfway along the craft, spraying up higher towards the rear.  The airflow of the fans also part the water and leave a shallow double-wake pattern. 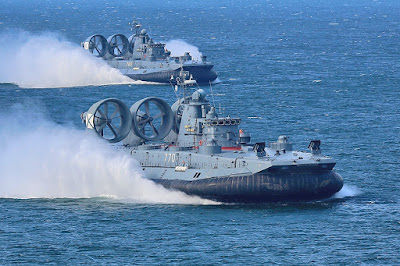 This lengthy explanation leads me to the base itself.  I wanted to sculpt the wave patterns so that the Dunerider looked more like a modern hovercraft passing over the water.  Below is a sort of photo diary of the sculpting process.  It's pretty straightforward, but I've detailed it anyway for anyone who wants to try and replicate the process!

Following the rather painful process of making Conga Blue's base, I decided to skip the cheap option and restocked all of my supplies now that lockdown has eased a little.  It still took a few weeks to get some of the chemicals and clay I needed, but making the base would be less stressful with the correct materials.

As I'd ordered a whole new batch of silicone, I could make a nice deep mould for the waves so I didn't have to worry about reinforcing it with anything else.  Although this made the process far more expensive, it saved me a lot of niggles, so was ultimately worth it.

I didn't bother photographing the resin pour or the de-moulding process as frankly, they were dull and I just wanted to get it done!  The short story is that it all went to plan and the mould worked perfectly!

And that's all of my progress with the Blowfish for now.  Once I've painted the bottom of the base with dark blue, I will be adding some frothy white water and slightly exaggerating some of the waves with clear medium.  Then I'll finally be ready to paint the Dunerider and crew!  I can't wait to see this project finished along with my two remaining knights and their Skitarii cohort!

Out for a stroll

In a previous post, I showed you two of my Knight Scion pilots from the Court of The Fisher King.  Now I've finished a few more, meaning I only have five more to paint before every member of the Court is represented in miniature form outside of their knights! 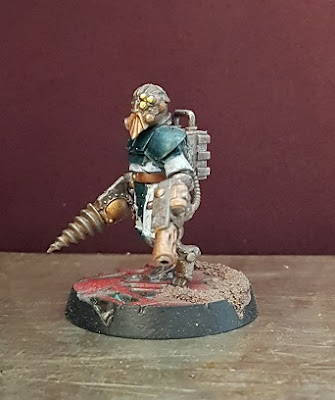 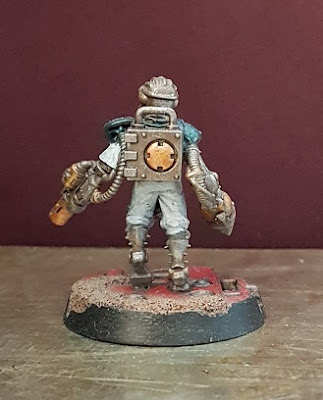 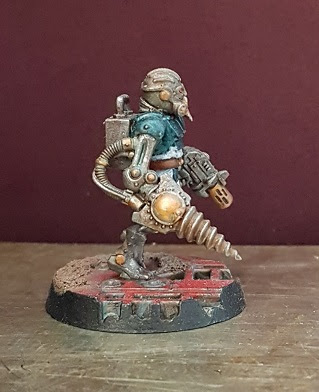 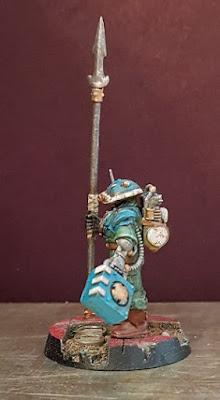 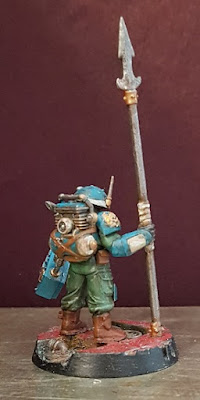 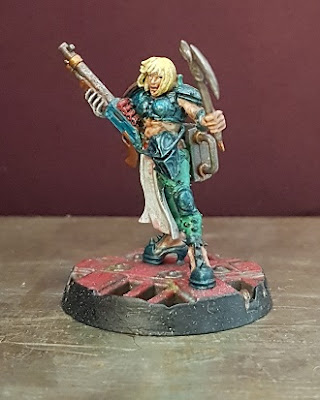 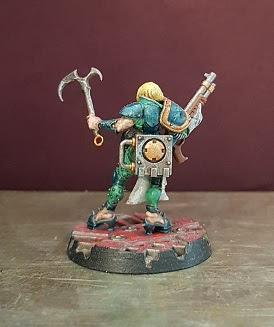 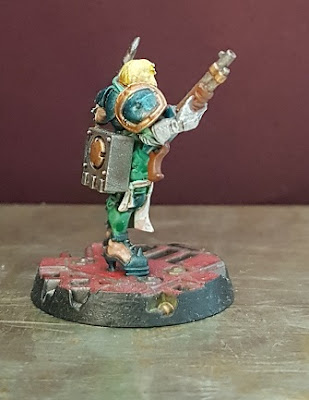