A new steed joins the fray

Barracuda Squall is the 9th Knight to join the Court of the Fisher King and the first Dominus chassis that I've painted.

I built this miniature over a year ago, but was never happy with the left arm electro-goad I had modelled him with. I left him boxed up for months while I pondered an alternative until I finally settled on the idea of creating a huge wrecking ball on a retractable chain for his replacement weapon.

I've created a unique Knight Scion pilot for each member of The Court of the Fisher King - I've already shown 5 in previous posts, but it's time to introduce 2 more!

Sir Parcival, the pilot of Barracuda Squall, is a thick set giant of a man. Possessed of a stoic, brooding personality, Parcival follows the edicts of his lord without question. Though he rarely speaks, when his opinion is given, Parcival's words are highly valued by the Knight's council who appreciate the wisdom he has gained over a century of loyal service.
Unlike other Scions of the court who delegate the maintenance of their warsuits to the capable hands of Sacristan Nautolex, Parcival frequently performs the rights of maintenance on his faithful steed, much to the chagrin of the wiley Mechanicus adept...

Caelia Hiralden is the pilot of the Cerastus Knight Reef Thresher - she proudly rides to battle alongside her husband Octillus Hiralden, their dual knight lancers filling their foe's hearts with dread as they crash into enemy lines.

And finally, I thought I'd give you a quick sneak peek of the coat of arms I've sculpted for the Court - I'll be casting it up in resin and will post some images of the final piece along with Mudskipper in the near future! 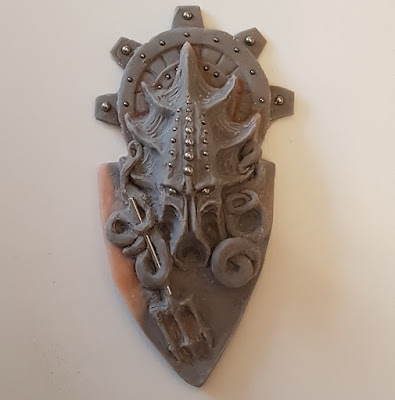 I decided to take a little break from making large miniatures for a while and instead concentrate on getting some more of my Blackstone Fortress miniatures painted up.

After completing several delves then our first Stronghold, we've ended up with the need for some extra gribblies.  In particular, the events we've triggered have left us with a higher alert level and more Spindle Drones being deployed during combats.  In order to ramp things up, I picked up 4 extra Spindle Drones and 4 more Ur-Ghuls as they're the most common enemies and I love the miniatures!

In addition to the sheer volume of miniatures required, I also wanted to be able to easily distinguish between the different squads as this can become confusing in the game if there's a lot of enemy groups on the board.  Having an extra set of each meant that I could paint them in opposing colours to make the squads clearly different.

As well as painting the new foes, I also managed to get a couple more characters finished along with an arco-flagellant retinue character.  I'll be back to working on giant robots again soon, but for now, enjoy the photos of my Blackstone Fortress denizens!