Welcome to my Blog and my first ever post!

I thought I'd start as I mean to go on; with a picture of something I've been working on!

So without further ado, here is my Genestealer Carnifex! 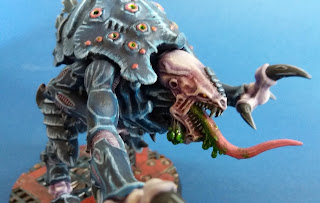 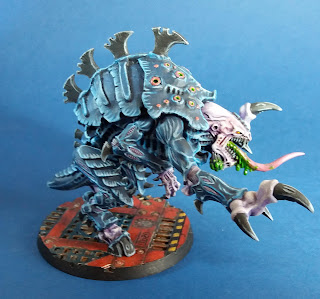 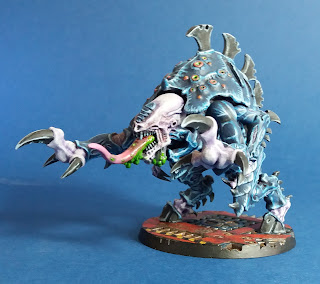 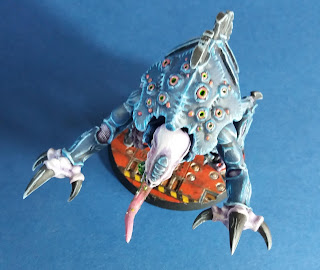 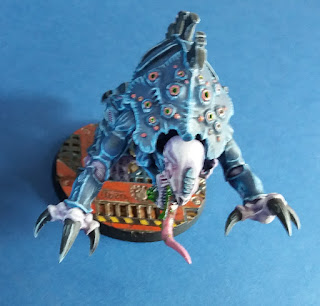 I've been playing Tyranids for years and have my own distinct colour scheme forthem, namely Black chitin, fleshy coloured heads, red maws and white teeth / claws.
Although I still love the scheme and intend to continue with it, when the Genestealer cults dropped last year, I decided that I wanted to make them distinctly different from my hive fleet.

In my opinion, Deathwatch Overkill was one of the best GW releases in recent history and the throw back to Space Hulk / Space Crusade colourings on the cult Genestealers was a big win in my book.  I decided to use that colour scheme for my Cult force going forwards as it would really help to differentiate between Cult and Hive Fleet armies.

I bought Overkill and am still pretty blown away by all of the cult minis that came with the game - the wave releases were also pretty great, but there weren't any large centrepiece monsters for the force.  As such, I decided to tinker with a Carnifex to create a horrific abomination which would sit nicely with my force.

From the picture, you'll immediately notice that I re-sculpted his head and gave him the large clawed arms from a Toxicrene / Maleceptor kit to make him more Genestealer-y.  If you look a little closer, you'll also see some subtle changes to his back plates, tail and other small areas to enhance his Genestealer posture!

I've only had one game with him so far - it was an 8th edition friendly against Nurgle Daemons and sadly he never even got close to the enemy as my other 'stealers and Broodlords killed everything before he even got close!!

A 6" move characteristic really hurts close combat 'fexes so my next game will see him deployed as far forward as possible!

Until next time, may the ground tremble under your mighty footsteps.