Today I want to talk about my Dark Eldar Haemonculus Coven.  I built a small number of them some time ago for a one off event that I ran called the Blood Games which was a sort of gladiatorial games set in Commorragh.

With the release of the new Dark Eldar / Drukhari Codex, I thought I'd have a little ramble about my thoughts on the Codex and share some images of how I'm reviving the force.

My observations on the Codex are limited mainly to the Coven units and shouldn't really be taken as having any battlefield value as quite frankly, my tactical genius extends only as far as making a themed army that looks great as it's wiped off the table!

My approach to battle and regard for my men's safety was recently likened to Wellington...

﻿
WARNING!!
If you don't like your own fingers then Drukhari are for you.  Be safe in the knowledge that should you ever require a lethal weapon to defend your home, look no further than a Dark Eldar Raider... 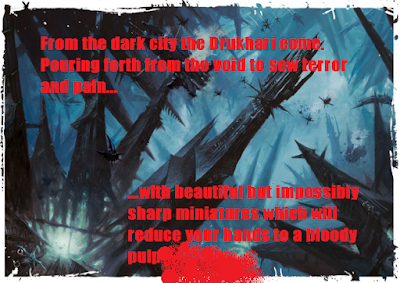 Although I understand why the Indexes were produced, I still found that they sucked the life out of the armies, leaving them as dry and lifeless husks.  Much like the effect of a hot summer on the British.

Well, I was extremely pleased to see that GW have restored not only the former glory of the Drukhari, but also breathed some new life into them as well.  Where the Indexes reduced the races to very bland variations of the same core troops, the Codexes have restored what was lost, with the individual qualities of the Dark Eldar coming back to the fore.

The Drukhari are once again a fragile but deadly force with a very distinct style of play.  Much like a scalpel, they need to be used with precision and planning to get the best results.  Which is why when I play them, they tend to get bludgeoned to death by thunder hammers on turn 2 after being poorly positioned!

Having said that, they are an absolute joy to play with in 8th edition.  The new strategems provide really useful benefits which you can use in lots of different situations rather than requiring a contrived and overly complicated A-team style plan in order to use them...


My favourite aspect of the new Codex is the fact that Incubi, Scourges and Mandrakes are now free agents, effectively allowing you to drop them into detachments without causing all of your other units to lose army traits and have some sort of existential / self-determination crisis mid-battle. 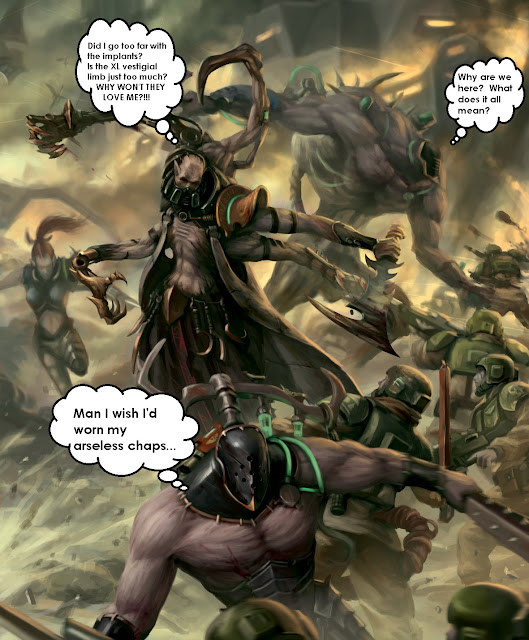 This free agent mechanic has led me to cast a slightly wider net when planning my Haemonculus Coven expansion.  As Covens traditionally don't do well against armoured targets (because it's hard to poison a land raider), I decided that I needed some mobile heavy weapons in order to dish out some anti-tank nastiness.  And to that end, I have created this bad boy...

Eventually, he'll be part of a whole unit with two blasters and two haywire blasters. Tanks shall be nommed....

So what the hell have I been up to?!

As well as adding some more outlandish conversions, I've also been revisiting the original units and either touching up worn paint jobs or just expanding the units.  I have more planned for the force but it's mainly WIP at the moment.  My chosen Coven is The Hex... 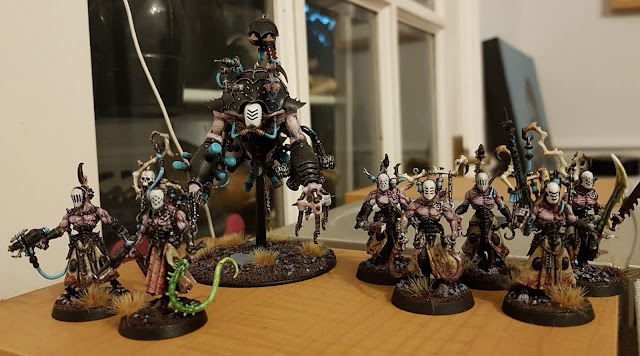 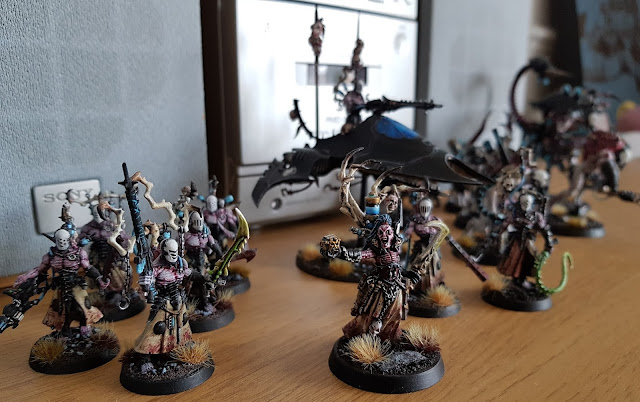 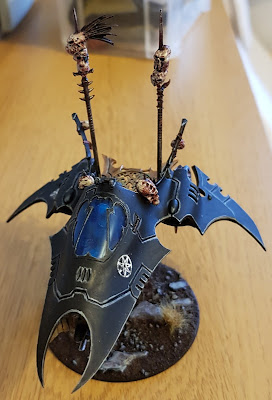 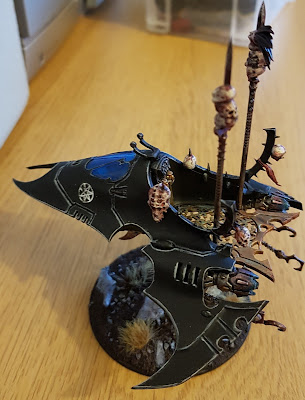 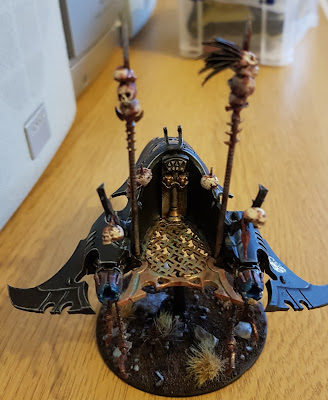 And finally, I'd like to show you one of my more diabolical creations.  As usual, I started work on this some time ago and it's not finished yet although the new Codex has given me the foot up the arse I needed to get him painted!

In-game he's an Eldar Wraith Knight armed with a giant Husk blade (Wraith Knight Glaive), a Shadow Field (Scatter Shield) and Disintegrator Cannons instead of Eldar Starcannons as they cost the same and vary only slightly in their profile.

﻿﻿﻿﻿﻿﻿I played a game with him on Saturday and even though he doesn't benefit from any of the Codex rules, he's still an absolute beast!!
﻿﻿﻿﻿ 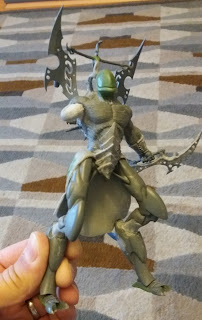 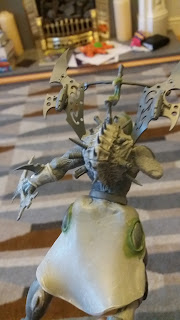 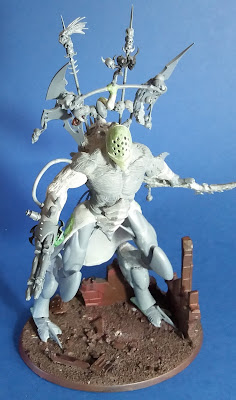 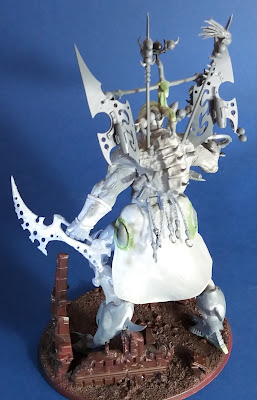 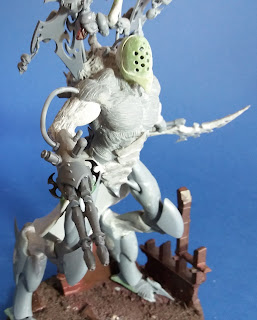 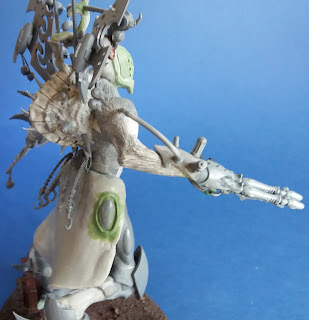 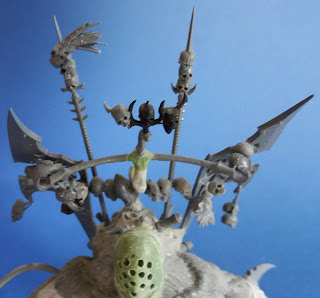 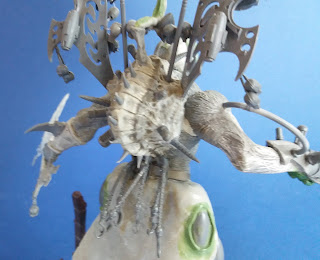 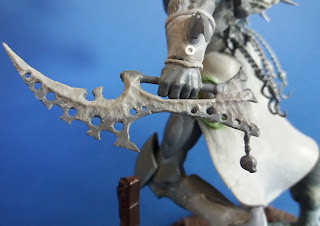 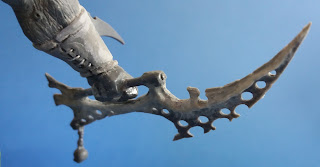 ﻿
Just time for one last sneak peak of things to come...