Greetings fellow traveller.  Some time ago, an old ally of the Fisher King resurfaced once again.  The below image was taken from a brief vid-capture, presumably as part of The Old Baron's long journey back to Corbenicia Prime...


The tale of The Old Baron is a long and sorrowful one.  Does his awakening herald a darker time for the planet?  Let us explore both his heritage and that of the Fisher King's fiefdom; the planet of Corbenic... 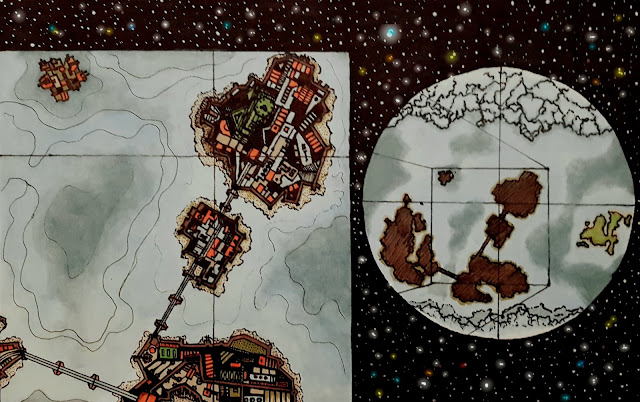 Corbenic is an Oceanic world, settled long ago, before the age of the Imperium began.  Human settlers tamed the savage World's seas by creating vast artificial structures.

Specially adjusted armoured suits were invaluable during this long process, allowing the settlers to lay foundations on the ocean floor whilst remaining protected from the local flora and fauna.

But the shining jewel of the system became an unforgiving, storm lashed Death World when the Age of Strife enveloped the Galaxy...
﻿﻿ 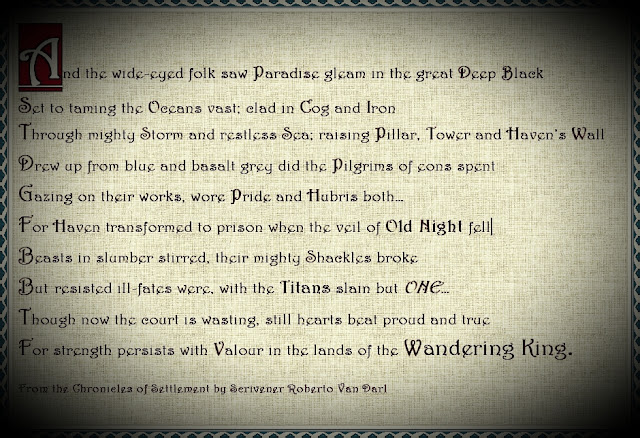 The Titans Awake
﻿﻿
The most significant catastrophe to befall the citizens of the Corbenician settlements during Old Night, was the awakening of colossal creatures, named The Titans by the inhabitants.

Whether the beasts merely slumbered in the depths, woken by the roiling seas or were birthed from warp breaches beneath the oceans is unknown.  What quickly became clear was that these creatures lived only to consume and destroy.

Eight of these vast monstrosities were recorded as they rampaged through the oceans, obliterating anything in their path.  Most smaller manufactorum rigs and aquatic research stations were annihilated with their first terrifying onslaught.

But as in the rest of the galaxy, humanity endured; stockpiling resources and swiftly refitting all available armoured suits for combat.  The survivors eventually  slew all of the great beasts, save for one.

The Questing Beast and The Mad Baron

Pursued by a Knight Magaera known as The Old Baron, the remaining titan 'Leviathan' has evaded a long overdue execution, surfacing only on rare occasions, particularly when an attempt is made to settle the only natural landmass on the planet.

Dubbed 'The Isle of Beasts', this continent is located in the Eastern oceans and is largely avoided for fear of the Titan's wrath.  Every attempt to capture or eliminate the beast has been unsuccessful and few survivors ever lived to tell the tale of their encounter.  All have been driven insane by their ordeal and speak only of a writhing inky blackness rising from the depths, accompanied by the shrieking cries of mariners consumed over the ages.  It is said to cause the oceans to boil with its approach and any who do not flee before it are mercilessly consumed...

Long ago, the pilot of The Old Baron vowed to dispose of this beast once and for all.  Lord Rictus Pellinore now hunts the beast, remaining in self imposed stasis for hundreds of years at a time, only rousing when the machine spirit of his faithful Knight Magaera detects the beast's signature.

So long has The Old Baron slumbered, that most believed him a myth.  The long stretches of isolation, swimming within the archaic systems of his Throne Mechanicum, coupled with his encounters of the Leviathan have driven him slowly to the brink of insanity.  Despite being affectionately dubbed 'Mad' Lord Pellinore, none doubt that he is the most steadfast and relentless of Corbenic's defenders.  That he has awoken during the birth of the Great Rift has been noted as a dire portent by all in the King's Court...


The Court of the Fisher King

Necessity drove the culture of Corbenic's governance into a more militaristic form during Old Night, developing into a Knightly Order ruled by the incumbent 'Fisher King'.  This title began as an honorific for the first Knight pilot to lay low one of the aquatic Titans.

The title has endured, handed down through generations to the greatest champions of man to patrol the great land walls of Corbenic's vast artificial structures.

Only a handful of Knight suits remain functional on the planet, for the oceans and their inhabitants are both relentless and unforgiving.

The most prominent Knights in operation are commanded by members of the Hiralden lineage.  The Fisher King is piloted by Count Octillus Hiralden, the current governor of the planet and Lord of the Household known as The Court of The Fisher King.

Within the household also reside Tidebreaker, piloted by the Count's daughter Ivraine Hiralden and Shellback, marching under the control of the Count's son Patrocles.

A seat within the Court is reserved for Lord Pellinore though he has not presented himself in centuries.

Despite not being a pilot, Sacristan Nautolex is the Count's most trusted advisor and Magos Domminus of the Corbenician Mechanaut Adepts who maintain the aging Knight suits.

A cohort of Skitarii Aquis are stationed in every region, supporting their Knightly masters during the regular defensive skirmishes and hunts which take place within the depths of the oceans.  [Pict-captures to follow]
By Goddenzilla
Email ThisBlogThis!Share to TwitterShare to FacebookShare to Pinterest
Labels: Corbenic, Imperial Knights, Magaera, The Fisher King, The Old Baron