A titanic Aeldari war machine wakes from its slumber... 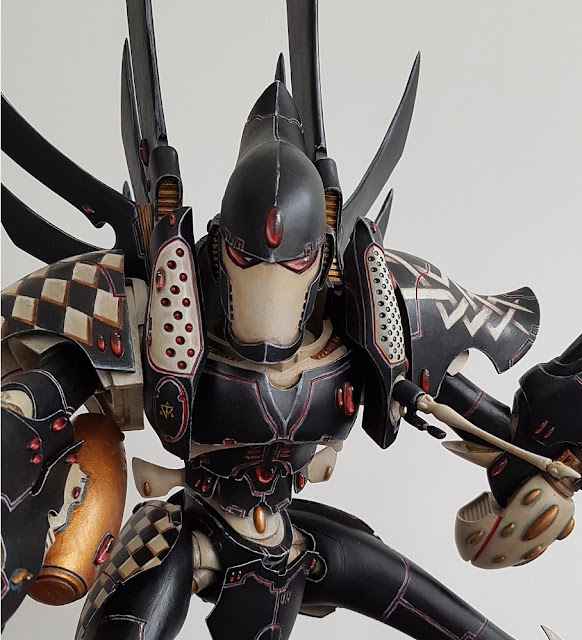 In bone and midnight clad...

Isha's Shear actually belongs to my friend Mark and has been a work in progress for quite some time.  I first built the titan over a decade ago for a huge apocalypse game we played at Warhammer World.  I painted the Phantom to a very basic standard with the intention of reprising the project.
Unfortunately it fell by the wayside for a number of years until there was a spurt of Xenos activity on the Titan Owner's Club chat that spurred me on.
I decided to give the engine a proper overhaul, disassembling the legs, arms, armour plates and completely changing the base.  I feel it's important to note that although I'm a very experienced model maker, I still found this kit very challenging.  If you're new to Forgeworld model kits, I'd steer clear of the Phantom until you have several complex builds under your belt.  There are multiple sections which will require pinning while presenting very little resin to actually hold one - definitely a kit for veteran model makers only!
I kept a short work log of the refurb, mainly focused on the painting and rebasing of the tian which I'll tag on to the end of the post - enjoy!

As the majority of the build was originally completed with super glue, I found that a number of joints were weakened and so I decided to disassemble any load bearing sections and smaller panels, then pin and reassemble them all after repainting the model.

I initially sketched out several designs for the banners - once I was happy with how I wanted them to look, I drew the design onto some thick paper and created borders with masking tape to help reduce warping.  I blocked out the main colours starting with black, then bone and finally red.

The original base for the Phantom was made from styrene and never felt particularly sturdy as it was too thin for deep pins and had a tendency to flex, cracking glue and surface details.  As a result, I chose to remove it completely and start from scratch.
I used a large wooden base and it was heavy enough to prevent toppling and thick enough to allow for deep pins into the Phantom's feet.
Because the Phantom is in a very wide, dynamic stance, I found that there was very little base surface taken up by the model's feet.  This left me quite a lot of empty space to fill with some nice detailing!
I opted to make a large wraithbone rune, broken and half buried in the ground.  This would represent some form of ancient monument, toppled in eons past and slowly reclaimed by jungle creepers.


I didn't bother document the painting of the main Phantom body as it was a pretty straightforward process of painting all of the recesses red, re-blacking out the panels and edge highlighting them. I'm really happy with how the final titan looks and I'm glad my friend liked it too!
After that little palette cleanser, I'll be returning to more familiar titan work in my next blog post, so stay tuned for my next Imperator build mega update soon!
By Goddenzilla
Email ThisBlogThis!Share to TwitterShare to FacebookShare to Pinterest
Labels: Aeldari, Eldar, Isha's Shear, Phantom Titan, Ulthwé