Warhounds, Princeps and Troggoths, oh my!

Previously on Kaiju country... I spoke about the Titan Owner's Club Walk 2019.  It's shaping up to be an absolutely incredible event and in preparation, I've been working on the two Warhounds for my the Titan Maniple that I'll be taking to the event.

With little over a week and a half left before the event, I've been steaming through the project and believe it or not, am actually on schedule to have everything ready in time!

So, how are they looking?  Here's how!

My first Warhound has taken a substantial amount of time, but is almost complete!  Between the complex pose and base, a considerable amount of time went into the build phase of this titan.  I don't regret it for a second, but it's taken almost as long as my Reaver titan to complete!

Working out the colour scheme for my Warhounds was tricky as I wanted to tie them in with Ferrum Dominus, but didn't want them to end up looking like Legio Ignatum whose modern incarnation now confusingly looks more like the original Epic Legio Metalica designs.

With the Adeptus Mechanicus originating from Metalica adopting white as one of their primary colours, I decided to try and shift the focus away from yellow, with my spot colours being predominantly black and white.

That said, I still love yellow and also wanted to tie in with my Knights Raven who feature yellow (How confusing!!)…

So, here are a couple of the initial rough designs I came up with...

Fulgar Manus actually ended up being pretty close to the design on the left as you can see from the following pictures...

WIP Images of the legs and base: 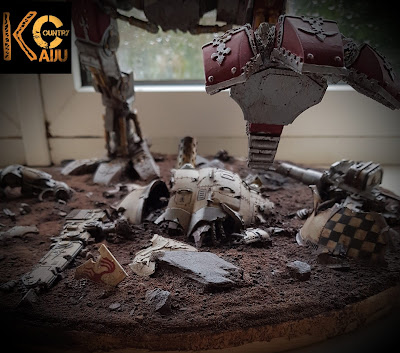 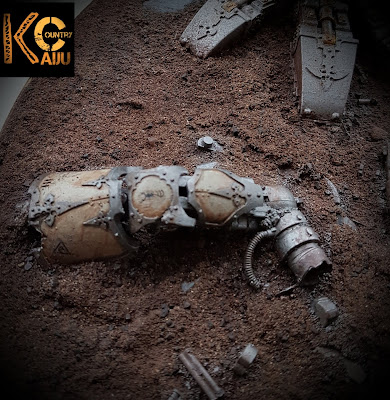 By comparison, I thundered through the build stage of Excidium Rex, taking just over a week including his base!  He's now base sprayed silver and is in the paint phase, although I don't currently have anything outside of WIP build images to show you.

Unlike his hound brother, I actually built the base first, with a pose in mind then constructed the Warhound to fit.  This was also a far quicker build because there was far less pinning to do - both of Rex's feet would be taking the weight of the body instead of just one!

Previously I showed you some images of the Princeps Cuirass which I made - well, I didn't stop there.  To really get the most out of the armoured Cuirass, you'd need to have a greatcoat underneath.  Despite searching high and low, I couldn't find a suitable garment which would work right out of the box so had to resort to a good old needle and thread.

To begin with, I managed to find an old burgundy coat at a charity shop for just £3 - bargain!  Once I had put it through the washing machine (as it stank of old ladies and cabbage), I started by removing the belt which was made from the same material as the jacket.  I kept this for use later on.

I think removed the buttons, sewed up the pockets and repaired a couple of seams on the basic jacket.  Now that I could test the fit, I found that the jacket was a bit short in the arm, so extending the cuffs was the first order of the day!


As I wanted the jacket to look like an actual officer's dress uniform, I decided early on that it would need both frogging on the chest and some pretty fancy epaulettes.  Note that the Aquila shape in the above picture was added as a base for the gold frogging in the final incarnation.

The cloth belt which I had originally removed was perfect for making epaulettes.  I cut both ends off, made a spatula shape from thin EVA (which would fit inside to give it some stiffness) and cut out some black leatherette to act as a cover.

In my next post, I should have some more pictures of the jacket along with the Cuirass and some other little accessories that I've been working on!


If you're still reading, then you probably came for some hot Troggoth action as hinted in the title of this post.  Well, your reward is this heavily converted Aleguzzler Gargant which is being added to my Troggherd!  Enjoy! :)