From Beyond The Stars....

...A Hunger That Never Dies

Today I took the time to take some decent pictures of my painted Bio-titans.  I actually have two more Hierodules (one scratch-built), but I've not painted them yet.  I will get them finished one day!

I plan to photograph some of my other Tyranids when I get some time as I do like my gribblies! 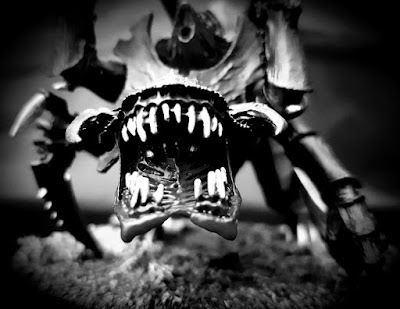 This Hierodule was not only my first bio-titan, but my first titan class miniature - purchased over a decade ago!  Nowadays, Flesh Stripper is the equivalent of a Knight, but he's still quite a monster!

The only conversion work on this model was the replacement of his scything talons as they were sculpted alongside an older range of Tyranids which didn't have the same segmented armour plates on the back of the talons.

I can't remember exactly which kit the talons came from, but I think they were from a Hive Tyrant or Carnifex.  Regardless, the swap was pretty easy and brings him nicely in line with the rest of the range! 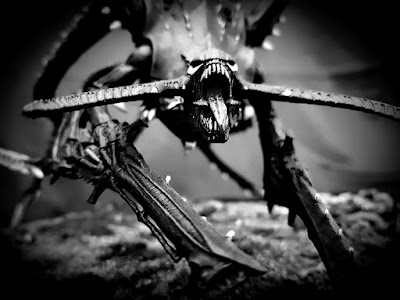 Insidious is a Hierophant bio-titan and he's both the largest and single most impressive Tyranid miniature in my collection with a base size of 12"!

This is an incredible sculpt by the masterful Simon Egan - there is so much detail in this miniature, it's staggering.  The 'guts' at the back of the rib-cage are especially lovely!

My only criticism of the model is the fact that the forearm claws are very thin and have a tendency to warp and break.  Having said that, I'm not sure how you could get around that issue without changing the spidery aesthetic.  I solved the issue by running a channel into each of the claws, inserting metal pins then sculpting back over it with putty.

I wouldn't recommend this kit for a beginner as it is pretty difficult to assemble, needing pinning and the addition of a ton of tiny spikes, but boy does it look impressive when it's finished!