Things can only get better right? 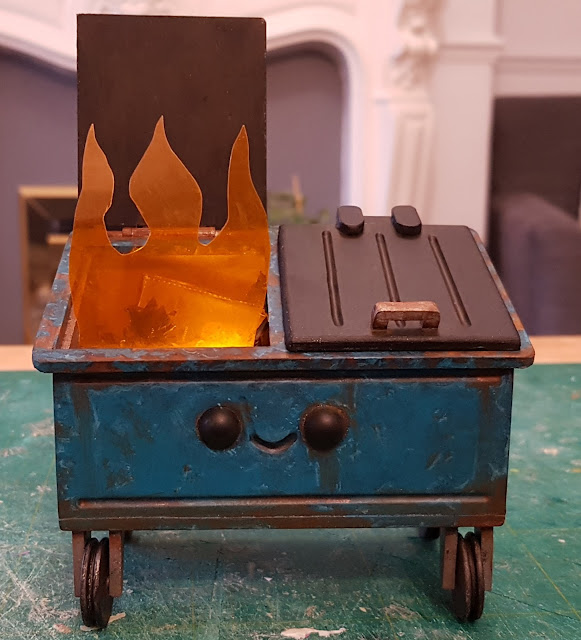 Every now and again I like to take a short break from my bigger projects to give me a break. It gives me some time to ponder any issues I'm facing while still doing something productive rather than keep bashing away at the same model until I can't face working on it!

My boss helpfully gave me one such project project when he decided to adopt the Dumpster Fire meme as our team mascot:

This was enough of an excuse for me to make my boss a physical mascot!

I started by making the basic box shape from Foamex - this was pretty straightforward, so I didn't bother taking pictures of the process.  The only thing I'll note is that when you're building with any any material, don't forget to take the sheet depth into account and plan the assembly when cutting the components otherwise you'll end up with under or overlapping edges!
Once the basic shape was done, I cut a hole in the base plate for the tealight to be installed (I would later adjust the size and shape of the hole, but it's easier to do this with a place to start).
I made the wheels from three plastic counters (one slightly smaller for the middle) sandwiched together.  I pre-sanded all three before gluing them together to improve adhesion - this is important with hard plastics as you can't using normal poly bonding cements.  I drilled a hole through the centre of each wheel then cut four two-piece legs - I glued a small plastic rivet to the inside of each leg piece so that the wheels would pop into place once the legs were glued to the base, holding the wheels in place while allowing them to spin freely.
I had already decided to make the two bine lids open up, so constructed two tiny hinges from multiple sections of styrene tubing. It's always fiddly assembling plastic hinges as you have to avoid glue getting into them! My advice is the pre-assemble the non-moving parts in advance, then very carefully glue the sub-assemblies together with fast drying gel super glue and a cocktail stick to avoid capilliary action drawing the glue into the joint!

After painting, I made some fake bin-bags and general rubbish to fill Skippy's tummy.  These were made from (clean!) dog-poo bags with a paper and crimped plastic filling. 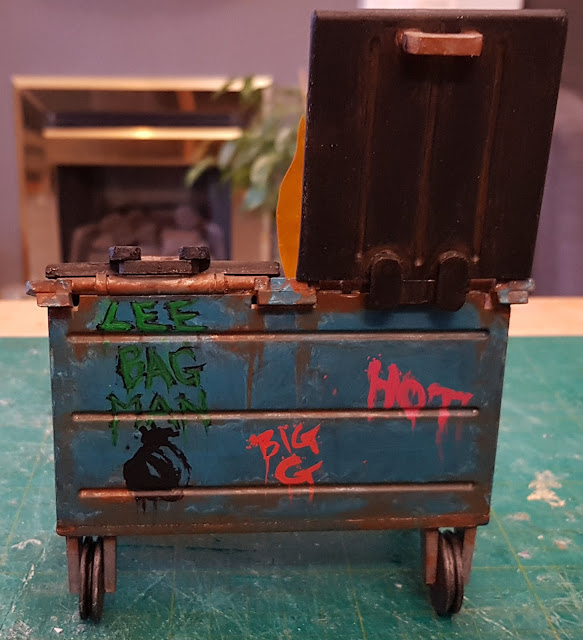 By Goddenzilla
Email ThisBlogThis!Share to TwitterShare to FacebookShare to Pinterest
Labels: Dumpster Fire, Skippy, This is Fine